I've waited 38 years for today!
I just didn't know it. 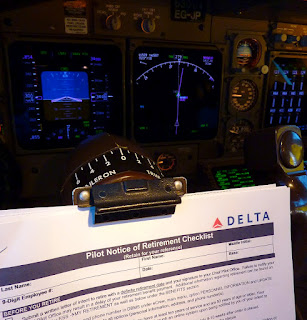 What? What's this??
Six weeks ago, Delta offered an early out program, the third such offer in the last few years. The first two came via NWA, but this last arriving via DAL. I passed on the previous two, but they sweetened the pot a bit and with some reluctance submitted my application. The company was explicit and advised that not all those who applied would necessarily be rewarded. Easily understandable, they can't let all 747 captains or all 777 captains retire as the training requirements would be burdensome.
The application process was open for 30 days, ending on July 30. Then there was a two week revocation period that ended at midnight on 14 August for those who might get cold feet, do a little soul searching and re-think their position. They expect about a 10% revocation. I'll admit to a few sleepless nights during this time period, tossing and turning, weighing the pros and cons and building a financial spreadsheet in my mind.  It's now noon on the 15th and I've not seen the final list posted anywhere, not that there's anything I can do about it, my decision became binding last night.
I suspect that my name will be on it but more importantly they will list the separation date for each person. That's what I really want to know. According to some, the earliest seperation date could be as soon as 1 September. Whoa.... that's only a couple of weeks away!
For 38 years I've been flying airliners and have a heck of a collection of uniforms in my closet, but today I'm sitting here on pins and needles wondering if that run is about to close. I'll write about it when it happens.


16 August 2012 @ 1200
Well, the list just came out, I'm on it and my separation or retirement date is 1 October. Let me say that again so it sinks into my brain... I retire on 1 October. As I approached 60 a few years ago, I just wasn't ready to retire and my "luck of the Irish" kicked in and the FAA changed the mandatory retirement age to 65. I lucked out big time. But now at 63.5, spending more time commuting to short call reserve than actually flying, the time has arrived. I'm mentally prepared and ready to pass the baton. So too are those younger than I who have waited patiently for my seat. I leave the responsibility that that seat represents in excellent hands.
As anyone who reads my blog knows, I've loved this job with a passion, even during the bad times when we suffered strikes, furloughs, mergers, pay cuts and other catastrophes. But they've all worked out, the good has far outweighed the bad and in the immortal words of Lou Gerhig, "Today, I'm the luckiest man in the world." I mean really, how many people get to experience flying a Boeing 747? And a 767, 757, 727, A320 and a DC-9 before that.
But please let me leave by clarifying my position to the many who read my blog and want to pursue this career. As good as it has been for me, keep in mind that you are working for a large corporation who really doesn't have your best interests in mind. This is not meant as criticism, it's simply a fact, just like your highest priority is your family, not your employer. Their obligations, any corporation's for that matter, lie with their share holders, this is a LEGAL obligation and they will do what ever is in their interests. Hopefully, we as employees will benefit as well. For the most part, over the last 38 years I have. I've written extensively in the past about having a back up plan when times are less than good. That's enough about that.
So, I have about 45 days remaining and expect to squeeze in a "last flight" somewhere along the line and will certainly chronicle it.
Thanks,
Rand 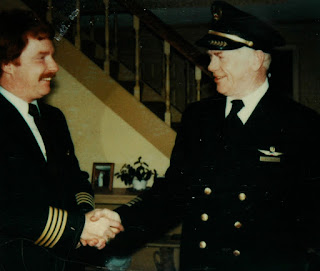 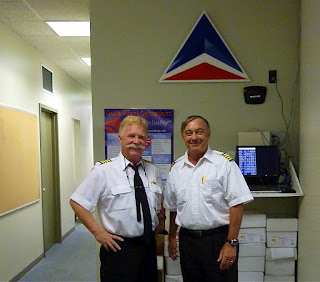 This is Tom and me standing in flight ops at JFK. Tom had just returned from Tel Aviv and I was leaving for Tel Aviv. Tom's an ANE buddy and he just retired on the same early out program that I did as a 747-400 captain. 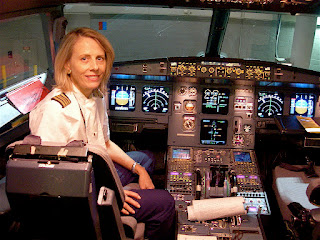 This is Sydney, Tom's wife and another Air New England refugee. She's an A-330 captain and took the early out program too. 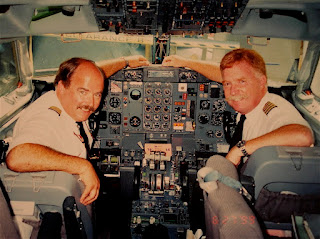 Tom, Syd and Wes all left ANE for MSP based North Central Airlines and have experienced several mergers now. They merged with Southern Airways to form Republic Airlines, then they brought Hughes Airwest into the fold, then merged with Northwest Airlines and now will retire from Delta. Let this be an example that the airline that first hires you may have little to do with whom you retire from. 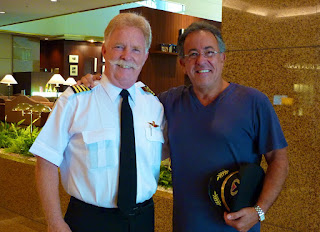 And yet another ANE friend Tony Q who took the last buy out and has been retired now for nearly a year.
A few days have passed since I was awarded my retirement date and its begun to sink in that my time here is finite.
Posted by Rand Peck at 12:49 PM 34 comments: