747 Reserve... oh, and the ill-behaved pax on American

I've received many emails lately, the latest from Rob in Oklahoma, asking where I've been. Why aren't you writing? Where are your pictures? Are you still alive? Firstly, thanks very much for your notes and concern for my welfare, it's much appreciated. 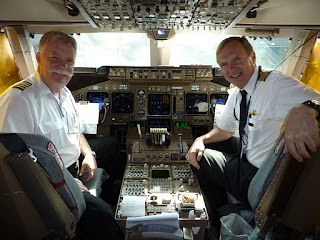 Captain Gene Peterson and myself preparing to leave JFK for Narita during my OE training.
Let me explain my absence. I completed ground-school and simulator training by mid May and then OE with Gene sometime in June and excitedly looked forward to getting out and flying the B-747-400. I could hardly wait! But as most of you know I was awarded this position in the "Reserve" category. As it turns out 747 reserves do very little flying. And I mean VERY LITTLE FLYING, two trips in eight months in my case.
We have only 16 of these aircraft, the airlines smallest fleet and see only two departures a day from DTW, our only 747 domicile. There are of course daily departures from JFK, Narita, Nagoya, Tel Aviv etc, but they're staffed and unlikely to change once the trip has begun.
I seem to spend most of my time commuting to MSP and visiting the simulator to maintain currency which means three takeoffs and landings every 90 days. These sim sessions of course expose us to much more than just the minimum criteria, such as engine failures, max crosswind landings, instrument takeoffs, aborts and a variety of precision and non precision approaches. But it's still just a simulator.
Some relish this lack of activity or what some consider "time off" but I'm not part of that group. I miss flying and its associated camaraderie. I miss wandering through Paris, Mainz, or London and enjoying dinner in restaurants that I've frequented for years. So, as soon as my training freeze expires next September I plan to bid the 767-400 in JFK and get back to that which I enjoy.... flying, exploring, eating and writing about it. 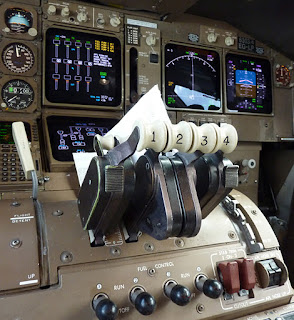 Now, before I complain too much, I've re-roofed my garage, painted my house, built an addition, constructed a garden with my wife, waxed my vehicles, built a few pieces of furniture, visited Switzerland and have read to my hearts content. It's been wonderful, but I would like to get out and fly occasionally. I miss the airplanes, the people and the activity.
I've had many offers though from several DC-9 and A-320 captains who would like to change positions! Hmmm....... I think not. As they say, "been there and done that," but thanks for your kind offer. 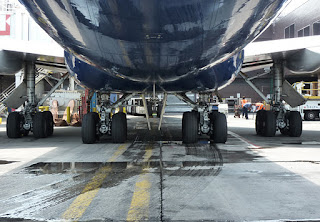 Hopefully crew sched will assign me a trip sometime soon so I can fire up my camera, activate my word processor and get back at it. Thanks again for your concerns and Merry Christmas.
But before I go indulge me; I can't help myself but I'll keep it short.
I know many smart people. But how do I know they're smart? It's simple, I determine this from conversation, how they handle themselves, how they relate to others, express their positions and live their lives. Are they loud, flamboyant, and like to be heard? Or do they listen as well as they speak and speak calmly with purpose and authority? I touched upon this in an earlier blog post when I stated, "the minute a captain has to raise his voice and remind someone that he is the captain... he's lost his authority."
When someone has to tell me that he or she is smart, because they're worried I may not notice it on my own... a red flag goes up. Alec Baldwin thought it was important to tell you and me he's smart because he plays games designed for "smart people." Oh!!
When that same person rants and raves, slams doors, thinks that the rules don't apply to him and resorts to name calling, "retired catholic school gym teachers" I'm unlikely to categorize him as smart as much as I'd label him "needy" of attention.
He's a celebrity, a movie star and lives in a different world than the rest of us. But it is "us" who give him his importance. Without "us" he'd not enjoy his elevated status. What's difficult for me to grasp though, is why we do.
Rand
Posted by Rand Peck at 9:19 AM 17 comments: