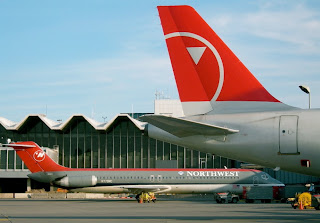 Yet another angle
As usual, I'm amazed! I shouldn't be probably, but I am. Yes, it's MSP as Joe said between the F and E concourses. They used to go by colors too; I think that these were the gold and red concourses, but I've forgotten. Mark, I easily see how you could have thought MEM as the streetside approach to MEM has a similar look. The DC-9 is a -50 series or specifically a -51, the last of the DC-9's before the Mad Dog (MD) series took flight. This aircraft 770NC was delivered new to North Central Airlines in March of 1977 and is no longer with the airline, although we have some 40 -50's still flying. After proudly displaying "Herman" on its tail, it went on to serve Republic and Northwest Airlines, but I'm unsure if it ever wore a Delta livery. I have many hours logged in this aircraft and like Bob, can faintly see a faded Herman through the now Red Tail. Sarah was correct in her aircraft assessment and as Devan pointed out, the easiest way to identify a -51 is by the strake located beneath the Captains and FO's windows. I think the MD's have these strakes too, but earlier DC-9's don't.
By the way, I didn't know about the font here and its connection with Lincoln Int'l in the movie AIRPORT. I'll have to watch for that the next time that I see it. Thanks.
Nice work!
Rand
Posted by Rand Peck at 3:46 PM 44 comments:

I have CQ next month, my tax information remains incomplete, yard work is demanding my attention and line flying fills my time, so I plan to take a break from writing for a while and simply display some of my photography on a frequent basis above. Hope to see you soon, but in the meanwhile I hope that you enjoy the pics that I put up. Have a great summer!
Thanks,
Rand
Posted by Rand Peck at 3:46 PM 43 comments: