I just arrived home from my latest annual training event, or CQ (Continuing Qualification) as we call it. As soon as I can I'll post pictures and a few comments. But until that time, I'm posting headline photo's of airline crews at work and play. In the meanwhile, for all of you who subscribe or read AIRWAYS magazine here's an interesting shot. 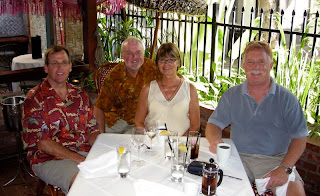 From left to right we have Clay Taylor, who writes BOTH SIDES, a monthly column that appears in Airways. Next are John and Seija Wegg, the Editor in Chief and Publisher of the magazine and myself. We all just happened to be in HNL at the same time and enjoyed lunch together. And by coincidence, I just missed John at SLC when I flew my first 767 trip from HNL. 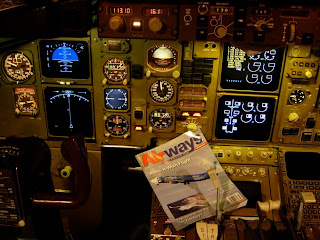 I recently completed my first 767 trip.... thanks very much to a very attentive crew who helped me through a new and very enjoyable experience. 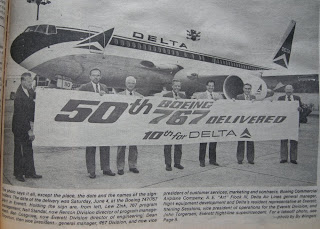 Delta is the only airline to have flown all of Boeing's 767 passenger models; the 200, 300, 300ER and 400ER. The 200's however, have been retired since 2006. The 767's maiden flight occurred on 26 September 1981, just three years prior to the last passenger 727 airframe to roll of the assembly line, destined for US Air. DAL started flying the 767 shortly thereafter in 1982. The picture above, from a Boeing employee newsletter, shows the airline receiving their 10th 767, the 50th to have been produced by Boeing Commercial Airplane Company. 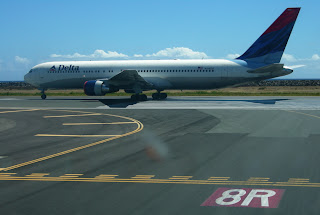 Sarah? Forget it, it's too easy.
My first flight in this type left HNL at 2115, a little dark to get good pictures, so these two shots of a -300 from my archives will have to suffice. (Any guesses?) I was also a little busy acclimating to a new aircraft to take the time to take pre-departure pictures. 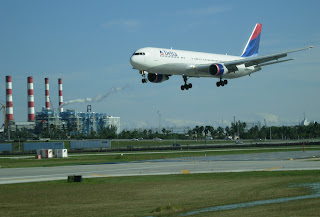 ???
Some one-thousand 767's have been constructed and the assembly line, started in 1981 is still open. This is the most popular aircraft across the Atlantic between North America and Europe. 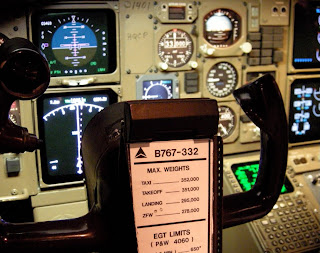 OK, were airborne out of HNL at FL330, established on R465, the "Charlie" track. This is a 300 model, or in Boeing terms a 332. Are you aware of Boeing's customer numbering system? The first number identifies the model and the last two numbers identify the airline. Delta's customer number is 32. Northwest's was 51, so our 757-300's were 757-351's in Boeing parlance. This number follows the airplane regardless of who operates it through the industry's ups and downs.
Ours tonight is a straight, 180 ETOPS model 332, not a 332ER. I'm told that this was a domestic 767 that was modified to meet "180 ETOPS" criteria for Pacific flights to HNL. 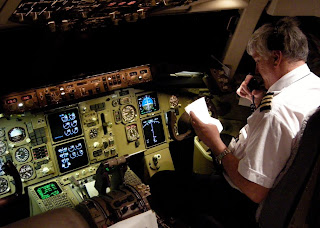 David Lamb, my First Officer makes an Oceanic position report with San Francisco AIRINC aboard aircraft 140LL, constructed in 1993. As you can tell by this photo, the resemblance to our 757's is remarkable, thus the dual type rating. The 300 evolved from the 200 model with a 21' 1" plug that lengthened it to 176' 1". Interestingly, our 757-351's are longer than these 767-332's by 2' 6". All 767's are considered "heavy" by ATC and just recently, the "heavy" moniker has been dropped on the 757-300.
As usual, we're enjoying a smooth ride across the Pacific tonight, due in large part to the efforts of our dispatcher. They do a great job balancing economics and ergonomics in search of comfort and economy. For those who think that the airlines are only interested in dollars saved (which they are, after all this is a business) I've seen dispatchers choose a lower altitude with a diminished tail wind, because that altitude is reporting smoother conditions than a more economically favorable one. Really! As pilots, we're always listening to others "ride reports" and are continually requesting ride information from ATC. If the flight is bumpy and ATC can accommodate us, (don't forget, there's a lot of traffic out here) we'll seek different altitudes in search of a better ride, regardless of economics. 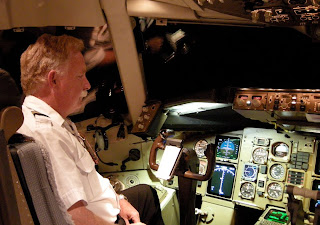 Contemplating life at FL330 out over a dark Pacific.
As David said when we entered the cockpit in HNL tonight, "now I know why you wanted to fly the first leg of this trip." Yup... guilty! It's because it would be my turn to fly this leg to SLC in the 767. Frankly, other than sitting a little higher above the ground, there are few clues that this is a 767. The hydraulic panel layout is a little different, the side panel is further away, the cockpit entrance door is offset to the left and the jumpseat looks more comfortable... that's about it. I hope that I remember that "higher part" when it comes to flaring in SLC. Also, the last time that I'd visited SLC was some 15 years ago in a 727. Not that it makes any difference; pull out the plate and make the approach! The hard part is always taxiing and finding the gate.
Note the half David Clark headset to my left. I feel like I'm back in a Cessna 170 or 180 with this monster though. Looks like I'll have to spring for my own Telex headset. 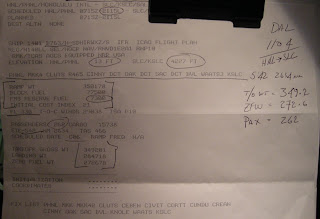 OK, here are the particulars concerning flight 1104 from HNL to SLC.
This is our new Delta release, a little different from the NWA World Flight release that you've seen here before. Basically the same information displayed in a little different format. In a nutshell a 349,200 pound takeoff with 262 passengers, 77,500 pounds of fuel and 5 hours 42 minutes to cover 2,634 nautical miles. As our weight diminished, the flight plan directs us to climb twice, once to FL 350 and then to FL 370 approximately an hour and a half before starting our descent into SLC. Over the Pacific out of VHF range, using HF procedures, this is a time consuming exercise coordinating with AIRINC and the FAA. Remember, there's no radar out here so this is all coordinated manually. Its taken me a little while to become comfortable with the new flight release, flight plan and winds format, but as my exposure increases so does my comfort level. Their weight & balance system is more complex than it needs to be, but we're figuring that out too. 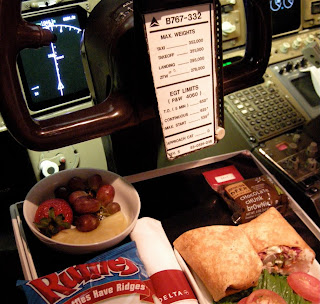 Dinner across the Pacific. Frankly I expected more than a burrito and a bag of chips! Here's the good news though, Delta has kept the Dancing Deer Brownies. I'll talk about this more in the View From the Cockpit column in the August issue of AIRWAYS MAGAZINE. Which of course you'll want to buy to read Jeff Kriendlers forth coming article concerning the NWA/DAL merger. 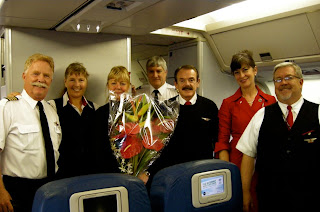 And finally thanks very much to our new colleagues, a pre-merger Delta flight attendant crew, wonderfully represented by; Patti, Cindy, (FO Dave) Vince, Patricia, Doug and Caron who missed this photo because she had to run to catch her commuter flight home. Speaking of which... I need to run too and catch the next flight to BOS. Today is Mothers Day and Cindy brought this Bird of Paradise from HNL for her mother. And for my mother, Happy Mothers Day Mom, thanks for always being there!
Rand
Posted by Rand Peck at 9:40 PM 14 comments:

I'm on the road. Arrived in LAX last night and leave for HNL later today. For some reason, I'm unable to make a comment on my present posting, so will make a new post to offer a hearty congratulations to Bob for identifying Nantucket Harbor beneath our beloved ANE DC-3. Send me a mailing address Bob and a size ( L or XL, they're 100% cotton) and I'll send your T-shirt on its way.
Thanks everyone for participating in the "where am I" shot postings; I'm utterly amazed at everyone's ability to identify some very odd locations.
When I return from HNL to the mainland on Sunday, it will be my first experience flying a 767 and to SLC to boot. Haven't been there since my 727 days. "Let's see... how do we start this thing???"
Rand
Posted by Rand Peck at 10:59 AM 4 comments:

This will be my my last "Guess where I am photo." The winner will win a Flying with Rand T-shirt. Sorry, a little late because I was mowing the lawn before I go back to work tomorrow.
Rand
Posted by Rand Peck at 2:28 PM 9 comments: