My Cub is For Sale... Well, actually it's SOLD!

PHOTO - CONTEST - WINNER
Click on my website to see Nilo Grisendi's winning shot for September.
- NOTICE -
If you're arriving at this blog via my old blog, RAND'S AVIATION PHOTOS, I'll be eliminating that site altogether on Sunday Sept 6. Unfortunately, the HTML became so "jumbled," for a lack of a better term, that I was unable to square it away. So please bookmark this site, or my website for easy access. Thanks...
But now on to more pressing matters.
I'm selling my Cub! What's that you say? Yes... I'm selling my Cub. I hate to do it, but I'm just not using her as much as I used to and we all know what happens to an unexercised engine. Yes, corrosion insidiously finds its way in, infects cylinder walls, possibly even the crank and it's the beginning of the end. There's a school of thought concerning antiques. You never really own them, you're just taking care of it during your stewardship before passing it along to a new care taker. I've taken good care of NC98342, have improved her considerably with timely upgrades but now think it's time to share her with another enthusiast who appreciates her beautiful lines, timeless look and quiet little engine. 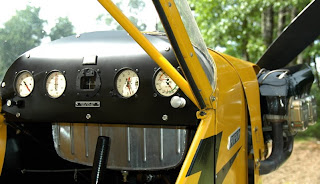 Just this past winter I pulled her cockpit instruments... all four of them and sent them to Keystone Instruments in Locke Haven, PA (where she was built in 1946) to be overhauled and refaced with cream colored faces and original Cub logos. It's the little things that make a classic a classic and this detail has greatly enhanced the look of her cockpit. You may notice the cylinders in this photo too. I replaced all four cylinders a few years ago with new Superior Millenniums. While I was under the hood I replaced both magnetos, the wiring harness and added an electric oil heater for winter operations. There's nothing worse than starting a cold engine on a cold day with cold oil. 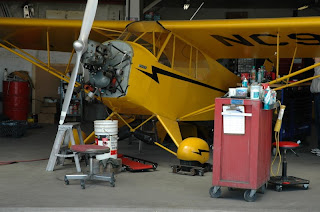 In fact here she is the day after I purchased her from the museum. We removed and replaced all four cylinders, both magnetos, the wiring harness and added the oil heater. Is that engine/firewall clean or what. I removed the wheel pants but still have them along with the mounting hardware. Even though they're not original, they look perfect and I've been offered vast amounts of money to sell them. While in for maintenance, we changed the shock cords too. What's a shock cord? They're the bungees, hidden inside the black vinyl covers between the landing gear. Often overlooked... but very important. This may be superfluous for most readers, but here's a very interesting article concerning Cub Shock Cords. 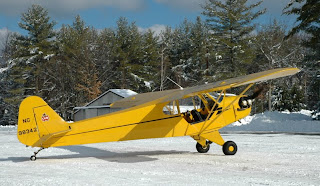 She's a 1946 J3 Cub with a 65 hp Continental engine. Meticulously restored in 1985 by Steve Miller in Marlboro, Mass, when owned by a retired Northeast Airlines/Delta Airlines captain, I had to go back 12 years to find 100 hours on her engine. That's why I replaced the cylinders. During this time she spent five years in a museum. So as you can see, she's had very little exposure to the sun. Though not good for the engine, it was great for the fabric, which is still in excellent condition. 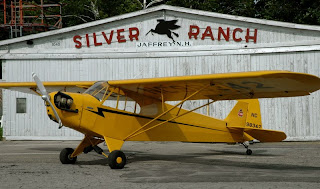 While she was in getting new cylinders and Bendix dual impulse magnetos, I replaced the lift struts with newer, heavier Univair struts to avoid the annual AD inspection required on the original versions. I love classic designs and as you can see in this photo have kept the original wheels, tires and brakes. As much as I might like a new set of Cleveland Brakes, this conversion requires the use of 600 x 6 tires, thus loosing the little round Cub tires and hub cap. Sorry, just couldn't do it! I've also kept the small, hard rubber tailwheel. I considered an 8" pneumatic tailwheel assembly, but it just didn't look right. 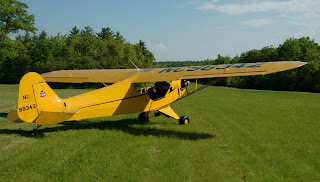 With an NC registration in all the right places, what aircraft looks more at home on a grass strip than a Piper J3 Cub? Forget moving maps and glass displays, there's nothing better than flying on a summer morning, low and slow in a Cub, with a sectional chart spread across your lap and the aroma of freshly mowed hay from below. Well, maybe an autumn afternoon watching the leaves of New England turn brilliant orange, red or yellow. OK, well maybe flying over a new snowfall, through a cobalt blue sky while approaching Mt. Washington. If you're looking for an airplane that turns heads, attracts attention, is a piece of Americana and will hold your interest in flying, then look for a Cub. It doesn't have to be this one, anyone will do. 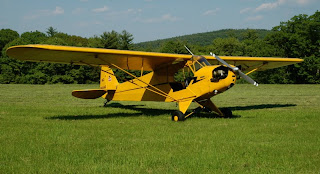 Now for a few particulars. Built in 1946 with aluminum spars, she has 3,500 hours total time, 719 SMOH and runs and flys beautifully. She was completely re-rigged in 2005. Her last annual was in June 2009 where all cylinders checked in at mid 70's compression. She had a minor fuel leak that was corrected by swapping out the fuel valve and we removed the muffler for welding. 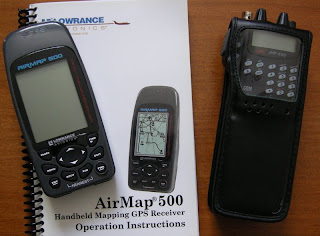 OK, what does she come with? Although I'm not a fan of GPS's with little tailwheel airplanes, you can have this Lowrance Airmap 500. I've never used it in this Cub, however admit to using it when I flew another Cub from Texas to New Hampshire a few years ago. I only used it a little though! In the photos I'm sure you've noticed the external antenna mounted overhead. It connects to this JRC, 720 channel handheld COM with a B&C connector. It works great. I also have two Dave Clark headsets. Additional items include the wheelpants, an insulated engine cover and a tailwheel dolly. You can see the dolly in the video.
And for a limited time only, I'll throw in a FLYING WITH RAND T-Shirt and cap. You can see them on my website. Imagine, all this history for a mere $39,500. What a bargain! Yes, the price is somewhat negotiable, but please, no tire-kickers.
Want to see her in action? Then click on the video above and watch what a classic little Cub does best... FLY! I made this video before I overhauled her instrument panel. Want more information? Then click on my Picasa gallery to see more detailed photography and the paperwork from my first annual inspection.
Thanks very much for looking, I'm on my way out the door to fly the Cub.
Rand
Posted by Rand Peck at 1:00 AM 10 comments: