Welcome to my new BLOG. I just couldn't relax for the summer leaving the remnants of my old BLOG rattling around through cyberspace. Not that relaxing really factored into my summer plans with a large move facing us in July and my daughters wedding in New Zealand coming up. But the HTML had become so jumbled I had to do something. So here it is; a new beginning. I'll add to it infrequently until the Fall, when I hope to be back at it full time. 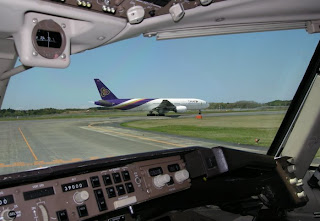 I flew a 13 day 757 Asian trip in April. We deadhead over on a 747-400 and then spend 11 days flying inter-Asian before heading home. I bid one of these trips every four months or so to see a different part of the world and experience a new flying environment. This particular trip hubbed out of Narita (Tokyo) and visited Bangkok, Guam and Osaka. Here, we've taxied out to runway 16L at Narita behind a Thai Airways Triple seven. 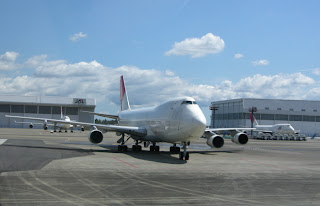 Do you notice anything different about this JAL 747? It will take a fair amount of left rudder to keep her straight on takeoff! 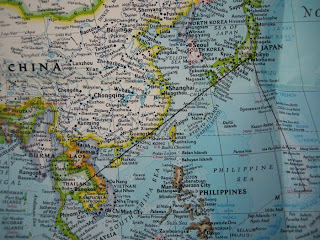 This National Geographic map will give you a pretty good idea of where we are. The flight to Bangkok covers 2,670 nautical miles over six hours thirty minutes and dispatches with 57,000 pounds of fuel. We leave Japanese airspace southwest bound over the East China Sea, fly between Taipei and Mainland China over the Straits of Formosa and make landfall over South Vietnam, just north of Da Nang over the Mekong River.
Narita to Guam is a mere 1,387 miles, flown in just three hours eighteen minutes. Out of VHF range over the Philippine Sea, we communicate with Tokyo and San Francisco Radios, giving position reports on HF frequencies. We fly parallel to the Bonin Trench, the Pacific's deepest section at 35,000 feet and can see Iwo Jima on a good day. That 35,000 feet is the ocean depth... not our altitude!
- Airline Crews -
The rest of this post is dedicated to the crews with whom I flew and met along the way. A complaint that has become very popular is how airline flying just isn't how it used to be. I disagree. Airline flying is about the crews and once the door is closed and you've pushed back from the gate, it's what you make of it. If you "slam click," grouse about your company and avoid the benefits that interesting layovers provide, your sour outlook will infect the crew. I've been most fortunate during my career to have avoided complainers and this trip was not any different. And before the emails start, I don't care where you layover, Saipan or Kalamazoo... there are interesting things to get out and see. In fact, I woke up one morning many years ago on a DC-9 AZO layover to a "clinking" sound. I opened my curtains to observe a couple of hundred people playing horseshoes. It was a state tournament, complete with a couple of small bands, a local brewery and BBQ pits. You know where my crew spent that day! 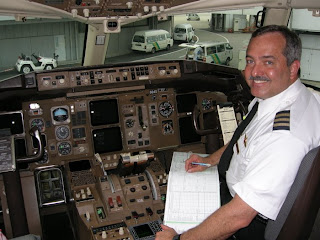 I had two Guam layovers on this trip and enjoyed the first one with John. 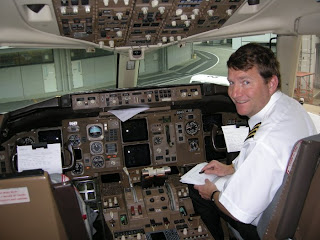 Later on the same day, I met John as I continued on to Narita from Osaka. 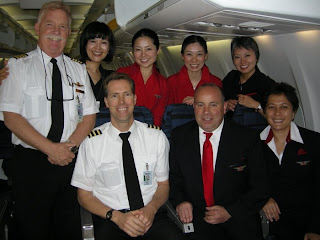 On another Osaka through flight I flew with Bruce, seated here next to our Purser, Brendan O'Callaghan. Now we've all met some very funny people in our lives... but until you've met Brendan, I've got one up on you! 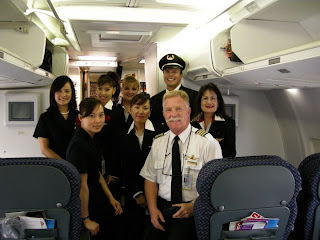 Hank and I are on our way to Bangkok from Narita. Unfortunately, Bangkok was experiencing extreme political unrest with riots and fully armed government troops. Although scheduled to layover downtown, it never happened as we stayed out near the airport. Most of the roads were closed and we were allowed nowhere near the action. I rather wimped out the next day, my excuse was to study for SVT, but Hank found something to do that was away from the political turmoil and I regret not going with him. 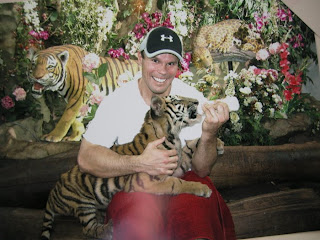 He went to the Tiger Farm. Located about an hour from the airport, and not easily accessible, they raise tigers here and you can hold and feed one if you'd care to. Before this picture, which he had to purchase because his camera malfunctioned, he held two new Cubs and scratched their bellies until they fell asleep. Just think of all the pictures he'd have had if I'd gone along! Hanks also an entrepreneur... visit with him at home in Daytona. 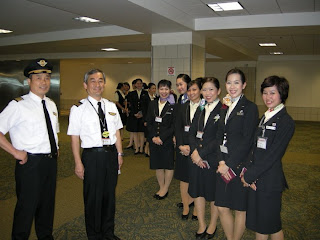 We ran into this JAL 747 crew in Guam as we all waited to clear customs. 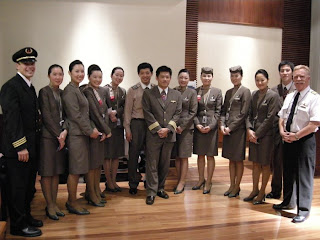 We met this Asiana crew in Bangkok at 0100 at the hotel. Unable to get downtown to our normal layover hotels, the local airport hotel, which was quite luxurious, accommodated many stranded crews. 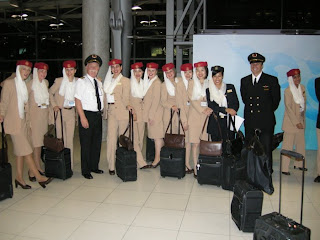 We met this Emirates crew at midnight while waiting to clear customs at Bangkok. 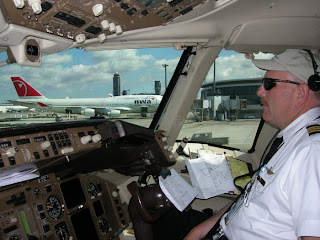 I took this while taxiing out of Narita for Guam. I apologize, I failed to note my FO's name on this flight. Maybe he'll see this and email me though. 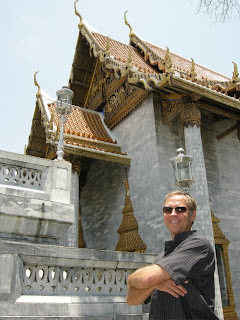 Wolfgang, standing by one of the many temples we visited in Bangkok. We finally made it downtown near the end of this 13 day trip and toured the canals and visited the Grand Palace. After nearly two weeks of not seeing tourists, and their money, we were very warmly received. 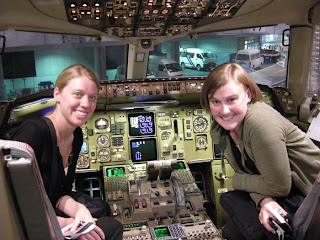 Crystal and Amy from Pinnacle Airlines,  jumpseating from NRT to BKK
Just a few days ago I was downstairs in the crew area in MSP when I saw this young woman approach and say hello. She's a Pinnacle RJ200 FO and at first I was unsure how she knew me. Then the light came on. Her name is Crystal and I'd met both her and Amy, a Pinnacle Captain, two months ago when they jumpseated with us from Narita to Bangkok. They were touring Thailand, Cambodia and Vietnam when Hank and I met them. I was greatly relieved to learn that they had returned home safely.
Have you noticed a common theme to these pictures? Everyone's smiling! No ones complaining about their airline because we're too busy having a good time. Yes there are many pitfalls to this job, but there are as many reasons to enjoy it. 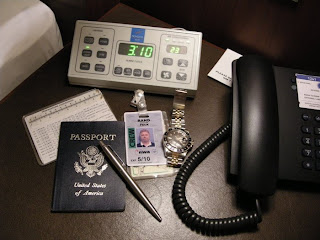 It's 0310 at the Bangkok downtown layover hotel as my alarm rattles me from sleep and my phone rings with my wake-up call. It's time to get up and head for the airport to fly back to Narita. No... I wasn't smiling!
Posted by Rand Peck at 12:19 PM