A Christmas Gift For My Crew 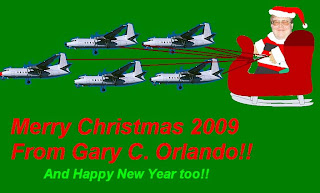 I just received this Christmas card from Gary Orlando, probably the most informed F-27 and FH-227 collector in the country. To visit Gary's site and learn more about these airplanes click on WHISTLE PIG to enjoy his collection. Gary and I have been contacted by a film production company in Dallas, Texas to participate in a new documentary film concerning the 1972 Fairchild crash in the Andes. Much has been written about this accident, including a movie titled ALIVE. More about this later.
NOTICE NOTICE NOTICE NOTICE NOTICE
The first flight of a B-787 occurred on 15 December 2009 and you can watch it via a Boeing Webcast right here. Click here to visit this site and witness this highly anticipated event.
For another perspective concerning this historic flight, click on Fox News. 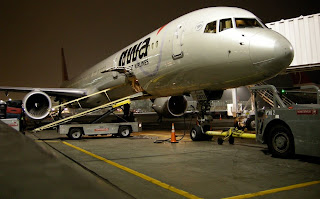 Ship 5813, a B-757-300 at the gate in HNL
Next stop LA
Just a few days ago, Greg (another New Hampshireman) and I flew flight 2622 from HNL to LAX with an LAX based flight attendant crew. We'd enjoyed our typical morning and afternoon on the beach, visiting the Waikiki Apple store, followed by watching the Patriots loose to New Orleans in the dome. Now at 7 and 4, our season isn't shaping up too well, but things would look up by the time we arrived at the gate. The agents handed me our paperwork and as I turned to leave told me that Josh and Ari were already on board. Hmmm... "who are Josh and Ari" I wondered? I'm due for a line check, must be a couple of check pilots, maybe the FAA, or simply a couple of jumpseaters trying to get home. 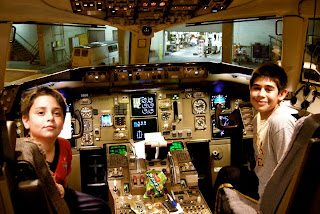 Ari and Josh in the command seats of a Boeing 757-300
(Apparently this isn't a line check!)
After loading the computers, pre-flighting the flight deck and exterior (it takes a little longer now as we've adopted Delta procedures and the copilot does just about everything as I offer moral support) our lead flight attendant brought Josh and Ari forward. I enjoy having kids come in to explore the cockpit and ask questions. Most are very shy and need to be coaxed, but not Josh, as he confidently walked in, introduced himself and his brother and asked pertinent questions. When I put them in our seats for this picture, the typical big brother directed his younger sibling... "don't touch anything." Most adults don't think to mention this! 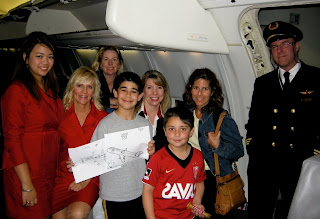 After arriving in LAX and the passengers had departed, I corralled Josh, Ari and their mother Dana for a shot with most of our crew. Josh is holding drawings of aircraft that he'd seen at gates during his travels and Ari has my Twix bar. Now you know they had to be good kids to get me to part with a Twix. 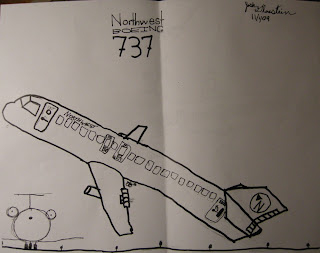 Above and below are examples of Josh's art work, now safely stored with my very extensive airline collection. 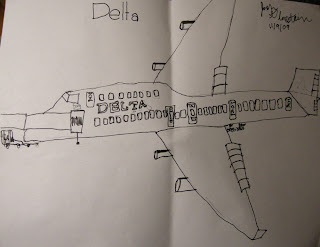 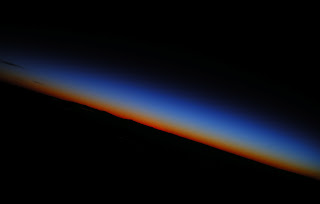 Flight 2622 covered 2,276 nautical miles across the Pacific tonight, burned 44,200 pounds of Jet-A, arrived 10 minutes early at LAX and experienced this beautiful sunrise. Rather looks like something out of "2001 Space Odyssey" don't you think?
But the best part of this trip was that we'd had a hand in uniting a family during the holiday season. Josh, Ari and Dana weren't just on holiday visiting Hawaii, they were there to unite with the boys Dad and Dana's husband, Neil. Neil serves in the U.S. Army, was on R&R from Iraq and has since returned to theater. He, like thousands of others who have answered the call of our Armed Forces, have made this flight and all of my flights for that matter possible. Thanks to all of you and especially to Neil, who entrusted us with the safe transport of his family across the Pacific tonight. And like Josh, we're all proud of his Dad.
Merry Christmas,
Rand
05B20
I was completely unaware that someone had taped my solo flight in 1971. Thought you might enjoy it! Actually it's just a different take on the old flying farmer routine
Posted by Rand Peck at 3:00 PM 10 comments: