A few weeks ago I was called out for a ten day trip. Although I preferred these long sojourns a few years ago, because they reduced the number of commutes I'd have to make, I find them a bit tedious now. But I enjoyed New York, Narita, Manila and Taipei layovers with some great crews. Let me tell you about just one of these legs from Narita to Manila. 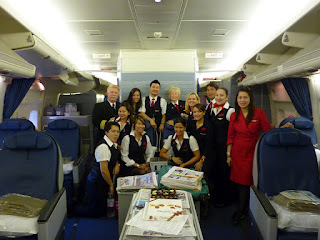 Fraser and I left flight planning and made our way to gate 17 at Narita. While he went outside to start his walk around inspection I met our cabin crew in the forward section of business class doing their brief. Though a comparatively short flight, we're full to Manila today so these folks will be very busy for four hours. This is aircraft 6312, constructed in July of 1999 and has not gone through the lie flat bed conversion yet as you can see here. A few posts ago I displayed pictures of the new seats in the upper deck. They're fantastic as everyone has easy access to an aisle without having to climb over someone else's extended footrest as they sleep. A great improvement! 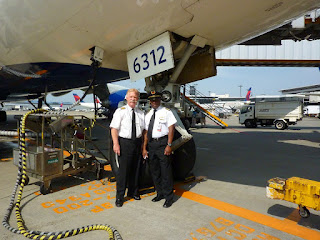 It's a beautiful day here in Narita so I couldn't help myself and went outside to take a few pictures. Fraser and me by the nosewheel. If you look closely in the background you'll notice four other DAL aircraft. We have a huge presence in Japan due primarily to the former NWA hub that served Narita for years. I've seen as many as 20 of our aircraft parked at gates and ramps at one time.
But how did that Hub come to be? Bear with me, I'm reaching way back into the recesses of my brain to come up with this stuff. Following WWII, while General Douglas Mac Arthur was the provisional head of the Japanese government, he set out to rebuild Japan, much like the Marshall Plan had done in Europe. He saw transportation as vital to the country's growth, and to make a very long story short, engaged Northwest Airlines to help build Japan Airlines. In return, NWA was given "Fifth Freedom Rights" in Japan. These rights allowed NWA to not only fly into Japan, but also to fly passengers from Japan to another foreign country and to repeat the process in reverse creating "inter Asian" flying. NWA inaugurated Asian service on 15 July 1947 flying a Douglas DC-4 from the US to Tokyo, Seoul, Shanghai and Manila. This is when the term "Orient" was added to Northwest's name; Northwest Orient Airlines. The flight originated in Minneapolis and via stops on the west coast and Alaska consumed 33 hours of flying. The day before yesterday, Fraser and I flew from New York to Narita in 12:57. 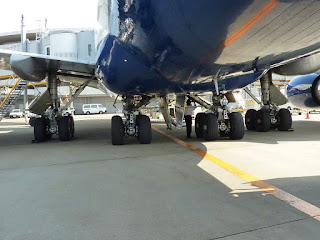 I've taken a few pictures of Fraser while he preflights to give you a perspective of the size of our 747-400. 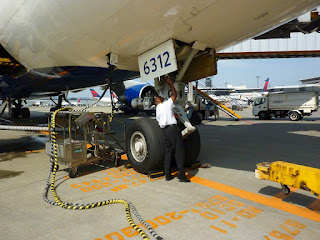 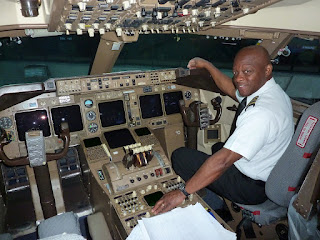 We're underway.
By the way, this is an "interport" flight, so unlike the long-haul flights, Fraser and I are the only pilots on board; there is no relief crew. The cockpit feels rather empty during the taxi in/out and during the departure/arrival. What's nice about this, each of us are guaranteed a takeoff and landing to help maintain qualification. Logging three takeoffs and landings in this airplane, flown mostly with two flight crews is very difficult. 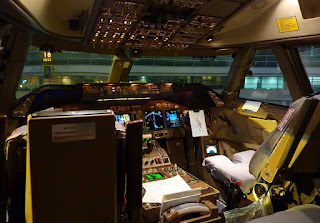 After a very quick flight of just under four hours, we've arrived in Manila and secure the airplane for the night. We'll now head for customs, meet our crew and head downtown for a 33 hour layover. I have something special planned for tomorrow, a visit that I've wanted to make for a while. See you in the lobby tomorrow morning. 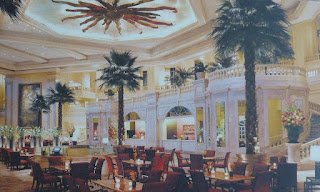 I just finished breakfast in one of the best buffets that I've ever enjoyed, I should have taken a picture. Back in our lobby, I'm awaiting my driver who will take me to the Manila American Cemetery and Memorial. It's only a short drive away and it will also give me the chance to see much of the city from an air conditioned vehicle. It's nearly 100 degrees outside with probably 90% humidity. Being a native northern New Englander, my tolerance for these conditions is low. 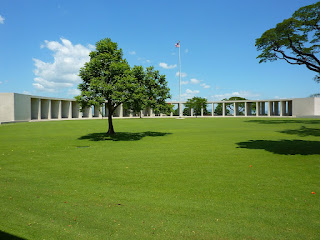 After passing security, my driver dropped me off at the entrance and I climbed a short set of stairs to enter the memorial. It's beautiful. The American Battle Monuments Commission oversee's 24 American burial grounds around the world with 124,905 interned service members. This facility, here in Manila, is the largest of all theses memorials with 17,097 headstones throughout the 152 acres. 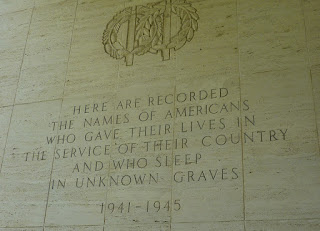 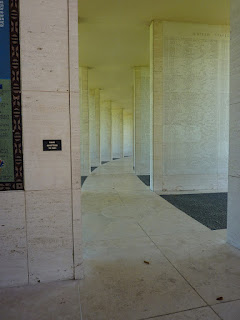 There are two hemicycles that flank a chapel with a carillon that define the center of the memorial that are faced with travertine limestone. These hemicycles, curved, enclosed walkways bear 36,286 names, engraved on their walls representing those who are listed as missing in action (MIA) from the Pacific, China, Burma and India Theaters of Operations during WWII. This equates to 1/3 of all those missing in action from the war. There are 29 Medal of Honor winners here and twenty sets of brothers buried side by side. 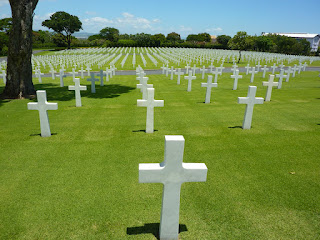 This is but one of the 11 burial sites that are arranged in concentric circles around the memorial. The crosses or Stars of David are made of white Italian marble. 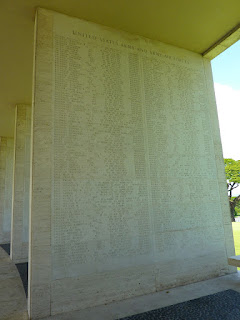 Just one of the limestone walls displaying the names of those missing in action from the Pacific Theater. 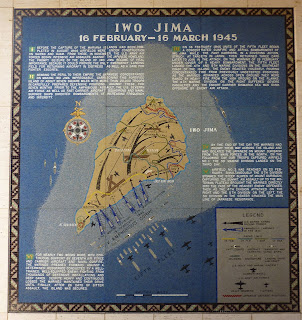 There are four rooms in the memorial that display these detailed, artistic, mosaic battle maps from the Pacific Theater. 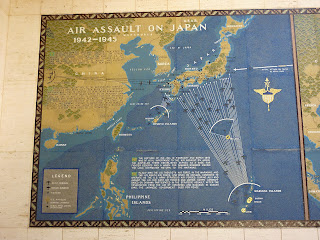 Let me tell you a little about these two. Many of you who read my posts are familiar with my writings concerning my travels to Saipan and Guam from Tokyo. These flights pass directly over Iwo Jima where the Marine 3rd, 4th and 5th Divisions of the Fifth Marine Amphibious  Corps endured more than 26,000 casualties, more than 6,800 dead during the 36 day assault that started on 15 June 1944. You may know of Joe Rosenthal's famous photograph showing five Marines and a Navy Corpsman raising the American flag atop Mt. Suribachi. (If you've never read James Bradley's Flags of our Fathers concerning this event, you've missed a wonderful read.)
So I was particularly interested in this campaign and eagerly read every word hoping to learn more about this significant WWII battle. While I was reading, a large group of Japanese tourists came into the room, their guide speaking very loudly as he explained the map and its history. Two women, about my age I guessed, looked at each other and shook their heads slightly. They then went to their guide, laid their hand on his arm and spoke softly to him. They then looked my way with a slight bow and stood in silence. As they said to me a little later, "we had no wish to disturb you."
I've spoken before about the kindness I've received while flying in Asia, particularly in Japan and I think that this typifies what I've spoken about.
I walked over to thank them for their thoughtfulness and ended up in a lengthly conversation. They were all from Osaka it turned out and were in Manila to celebrate their high school graduation. And I was right, we'd all graduated from high school between 1967 and '68. Anyway, if the memorial wasn't moving enough, this little encounter certainly made it even more so. 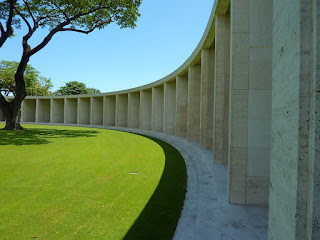 One of the two hemicircles that meet at the Chapel. Each of the slabs, or walls that you see here contain the 36,000 names that I previously mentioned. 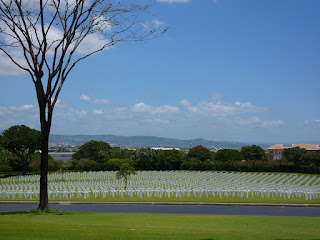 I was preparing to meet my driver and head back to the hotel as I gazed out upon one of the burial fields one final time. It suddenly occurred to me that I'm not just looking at marble grave markers of old men, I'm looking at the graves of thousands of "kids." Yes, kids who ranged in age from probably 17 to 21 who died before I was even born.
There was no one else around, not that it made any difference to me, but I snapped my heels together, stood erect and offered a hand salute as best I could remember to do. It's been a while. My vision became badly blurred as I thought of how much has been given to me by so many. How many lives, how many dreams were cut short and how many loved ones mourned those in these hallowed fields more than a half a century before? Memorials like this certainly have a way of putting things into perspective. 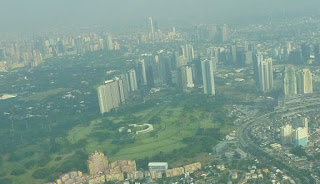 Here's a little different perspective of the Cemetery and Memorial after take off from Manila as we turn en route to join N884 to Tokyo. Here's another interesting site with more information.

Many confuse Veterans Day and Memorial Day. Memorial Day, originally called Decoration Day, was to commemorate fallen Union soldiers from the Civil War. Soldiers families would gather for the day at family grave sites and decorate the stone with flags, flowers and pictures, thus the term Decoration Day. Today it's to recognize all US military personnel who have died while serving in the Armed Forces. Veterans Day, started in 1954, is simply a day to honor all US veterans of the armed services.

As usual, thanks very much for reading my stuff and I hope that you have an enjoyable Memorial Day with your families and friends.
Rand
Posted by Rand Peck at 8:17 PM 12 comments: