A new story about Northeast Airlines is out.

Here's an interesting story, let's see if authorities finally take a crew assault seriously!
Just a quick note please before we get into NEA... 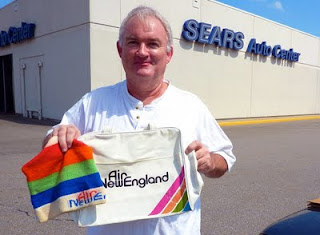 I met Jack Hartery yesterday who worked for Air New England from 1974 until 1979 while he was visiting his sister in NH. After ANE he enjoyed a 25 year career with United Airlines as a dispatcher. He donated much to my ANE collection and my ANE friends can learn more by visiting our Picasa album. Great to see you again Jack and thanks for contacting me.
Northeast Airlines 1931 - 1972 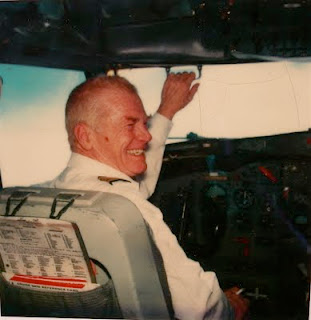 My Dad in a B-727 during his retirement flight in 1980
As many of you know, I have a penchant for Northeast Airlines. An unabashed admiration for those who formed it, flew for it, maintained it, invested in it and otherwise served to keep the colorful airline aloft. Organized in 1931 under contract with Juan Trippe at Pan American Airways, it survived on its own until merging with Delta in 1972. It also had a long railroad affiliation until changing its name from Boston-Maine Airways to Northeast Airlines in 1940 with the introduction of its first, brand new, Douglas DC-3. It's fleet over the years grew from its core of Stinsons, to Lockheed 10A's, DC-3's, Convair 240's, DC-4's, DC-6B's, Viscounts, FH-227's, Convair 880's, 727's and DC-9's. In fact they flew a Curtis-Wright Commando for a short period of time. 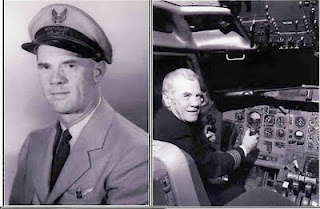 My father as a Convair 240 and DC-3 captain and a B-727 captain
Dad hired on at NEA in 1946 after serving during WWII with the US Army Air Force, flying C-47's, B25's and B26's. He hung around the NEA East Boston hangar complex for days, pestering Chief Pilot Pappy Wheeler until he hired him as a DC-3 copilot. Other names that I grew up with as a kid were captain Andy Anderson, the airlines first pilot who flew their Stinson Tri-motors acquired from The Ludington Line. He retired in the mid sixties flying a Convair 880. Not bad for a little "shoe string" airline. Captain Anderson had also served the airline and its pilots as VP of Flight Ops and later as it's ALPA MEC Chairman.
There's not much written about Northeast, a trunk carrier that flew pretty much as a regional airline until breaking out in 1957 when the CAB (Civil Aeronautics Board, now defunct) awarded it Florida rights, much to the consternation of Rickenbacker at Eastern and Baker at National. However, captain Bob Mudge undertook the challenge and wrote the airlines biography, Adventures of a Yellowbird, that chronicled the airline from 1931 until its entry into the jet age. Bob is another hero of mine, along with retired captain Norman Houle, the official, unofficial company historian. I've spent hours sitting with these men listening to stories that only whet my appetite more to become an airline pilot.
Do an Amazon or Ebay search for captain Mudge's book and you might, just might find one for under a hundred dollars. That's how rare it is. I have three signed copies, but don't ask to borrow one; it's the only book in my collection that I will NOT lend out. Several years ago at an NEA reunion, TWA captain Bob Buck, another legend, asked if I knew of Bob's book concerning meteorology. According to captain Buck, it is "the most scholarly book written in its field." I have one of these too and of course, Bob Mudge mocked me when I asked him to autograph it. "That old thing Rand, why in the world would you want me to sign it?"
Because it's a masterpiece, a piece of history that has contributed to the level of safety that we enjoy today. 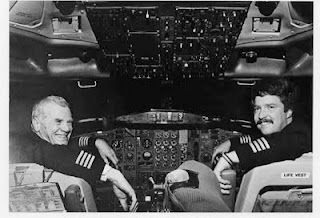 My father and "Red's Boy" as his contemporaries refer to me.
I'm very proud of that moniker!
Above, my Dad and me in the cockpit of a B-727 on his retirement flight in January 1980. My four stripes were earned at the time flying as a Twin Otter captain at BOS based Air New England. I loved my time at ANE and flew there right up until they closed the doors in October of 1981. It was as close as I'd get to flying for NEA, over the same routes out of BOS and LGA. As a boy in the late 1950's, I remember flying to Florida with my father in the jumpseat of a DC-6B. 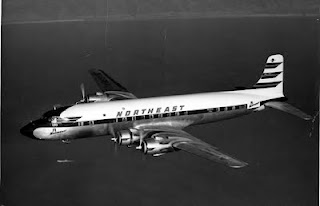 We departed BOS at midnight in a roaring Noreaster, dumping massive amounts of snow throughout New England. Seven or so hours later, after listening to four Pratt & Whitney R2800's beat flawlessly and navigating a dark and foreboding Eastern Seaboard, the shining city of Miami appeared through the windscreen. White beaches, aqua water, sailboats and glimmering buildings in the sun, erased any thoughts of inclement weather left behind in Boston and further drove me to seek this life aloft. The food was pretty good too, but it would be years later until I acquired a taste for "airline coffee." 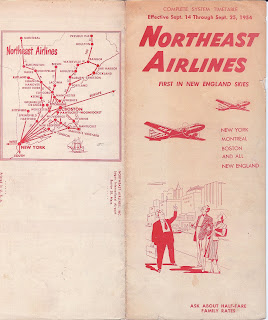 As a side-note, I interviewed with Delta in 1978 in ATL. After looking through my application and resume, my inquisitor, apparently happy with what he saw said, "Rand, you're going to love it here at Delta, it's a family operation." Needless to say I was excited as visions of DC-9's and 727's danced in my head. Flying those Beech 18's and Twin Otters finally paid off. But hold on a second...
A few moments later he noticed a section on the application that asked, Do you have any family members in the employ of Delta Airlines? Of course I answered affirmatively with "yes, CK Peck, BOS captain." With that my major airline career hopes were dashed and the Twin Otters replaced the Nines and 727's yet again. Delta had a nepotism clause in those days excluding family members from working at THE FAMILY. I've never understood this but that was their policy, so back to flying my New England routes until deregulation came about and changed everything. 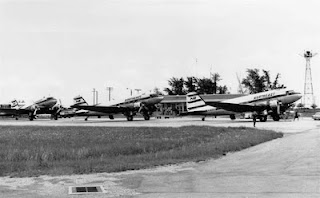 A fleet of Northeast Airlines DC-3's at the Barre-Montipelier Airport in Vermont. 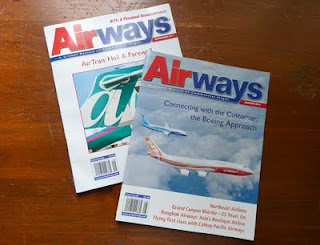 Frankly, I've written about all of this before and most of it can be found on my website under the tab, RAND'S HISTORY, but as you may have guessed there's a reason that I've brought it up again. Author David Stringer has written a three part history of NEA for AIRWAYS MAGAZINE, the last part to appear in the October issue. The first two installments are in the August and September issue of 2011.
As I'd mentioned to Editor Wegg in an email, "I started reading David's story with a jaded eye, after all, how could an outsider possibly get this right." I'm happy to report that my concerns were unfounded as Stringer has done a superb job of portraying the nations smallest trunk airline. He successfully captured it's flavor, it's essence and it's place in history. Captains, Mudge, Houle and Peck I'm sure would be pleased with his work.
I'm also an unabashed supporter of AIRWAYS MAGAZINE, not just because they publish some of my work, (not all of it, they're very selective) but because it's the bible from my perspective, for the tens of thousands of commercial aviation enthusiasts around the globe. I see them everywhere with their cameras on tripods when landing at airfields throughout the U.S., Asia and Europe. It's the premier commercial aviation publication, written by enthusiasts for enthusiasts.
Anyway, if you enjoy airline history, particularly when that history includes round engines, cowl flaps and METO power, you won't want to miss Stringer's three part NEA history.
As usual, thanks for reading.
Rand
Posted by Rand Peck at 10:28 AM