I'd planned to introduce you to FO James Reeman in this posting but that will have to wait awhile as I've had a few problems attaching his photography to my blog. You're going to really enjoy it so stand by a while until I iron out a few problems.
In the meanwhile, join Greg and me as we flight plan, meet our crew and fly to Saipan and back to Narita. 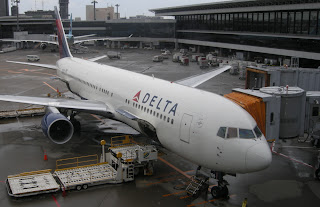 We'd arrived in Asia a few days earlier via Delta 183, Seattle to Osaka in this B-767-300ER. Of course we had a relief pilot for this flight as it covered 4,617 nautical miles in ten hours 54 minutes. We carried a moderate load of 200 passengers with 7,200 pounds of freight and 143,500 pounds of fuel for a takeoff weight of just a little over 400,000 pounds.  After takeoff from SEA we travelled north to Anchorage. I love flying through this area along the Aleutian Island Chain past Cold Bay and Dutch Harbor. Northwest Airlines pioneered this region during WWII in DC-3's and DC-4's and created an impressive history under extremely harsh conditions. In other words, other airline pilots paved the way for me today.
From here we made a slight westerly turn to join the North Pacific tracks, go feet wet and traverse Russian and Chinese airspace. Ten and a half hours later and more than ready to land, we started our descent after passing Sendai, Tokyo and Nagoya. The Japanese eastern coastal region is spectacularly beautiful and my thoughts go out to the many Japanese friends that I've made over the years as I write this. They've endured massive destruction in the form of earthquakes and tsunami's with their usual uncomplaining attitude. I've traveled the world, met thousands of people and have never met kinder or gentler people. Let me give you a few examples below of just some of my friends. Please notice, they always have a smile on their faces. 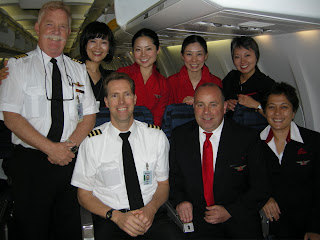 A crew from Osaka to Narita 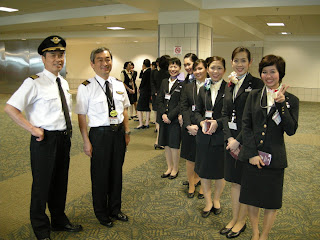 Meeting a JAL crew while standing in the customs line at Saipan. 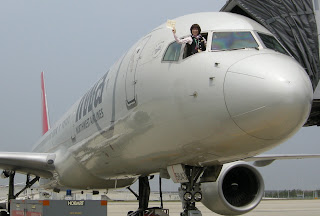 One of our gate agents at Nagoya. 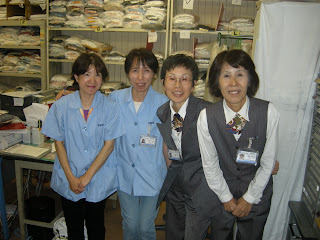 Here are four of the six ladies who run the Radisson laundry service for our pilots and flight attendants. Every time I show up they act as if I'm the most important person in the world and they couldn't wait to see me. It's a nice greeting when you're 4,000 miles from home! 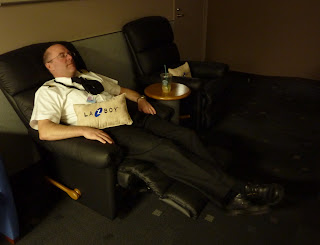 Well, Greg's still a little worn out from our long flight from SEA to Osaka and curled up in one of the Lazy-Boy recliners in the crew lounge. Kids! 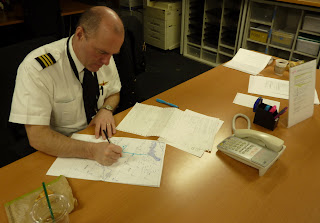 But the slave driver that I am, gets him up to draw our oceanic chart down to Saipan. 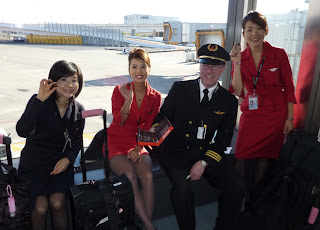 And finally out to the gate to meet our flight attendant crew as we await the arrival of our 757. Yup, more smiling people. It's nice to fly with someone who has a sweet tooth as he passes out chocolate macadamia nuts. 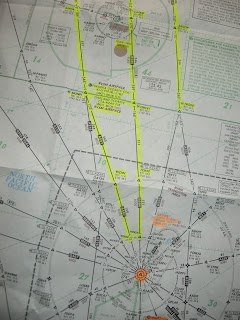 Here's our route from Narita to Saipan: RJAA, MANGO, OTR20, ADKAK, A337, TEGOD, G205, GUYES, DCT PGSN. A337 is the yellow line to the far right. This is a relatively quick flight of just three hours eight minutes to cover 1,342 nautical miles. We'll be out of VHF range so will communicate via HF with Tokyo and San Francisco Radios. This will be a long day though because this is a SPN turn. We'll have an hour and a half on the ground and then it's crank it up and fly back to NRT. About a 12 hour duty day with nearly eight hours of flying. The southern flight will be uneventful, but the return trip will be spent dodging thunderstorms that build along this route as the day passes. They won't be imbedded so navigating past them is fairly easy, except for the HF radio work to coordinate it all though. 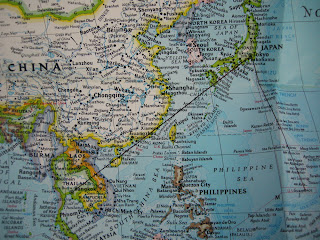 Here's what it looks like on a more conventional National Geographic map. We're the black line to the right. From Narita we'll fly pretty much directly to Iwo Jima and follow the Bonin Trench which becomes the Mariana Trench to the Northern Mariana Islands. This area encompasses the deepest point of the worlds largest Ocean, which according to National Geographic is 36,200 feet. 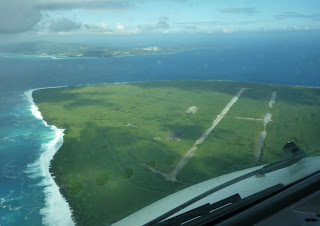 Approximately 200 miles north of Saipan, we've contacted Guam approach on VHF and received a clearance to descend, pilots discretion to 10,000 feet. In an attempt to stay high as long as possible and save fuel, we've built an intersection in our FMC to cross a point 30 miles north of Saipan at 10,000 feet and 250 knots. This will give us an economical, power off descent of 29,000 feet. We've added the 250 knots by habit, because if more than 12 miles offshore it's not necessary to slow to this restricted speed. But 30 miles at 250 will pass quickly enough so we'll keep it in and plan as usual. Besides, we're a little early so it's not necessary to come screaming in and then have to use the boards.


In the distance you can see the runway at Saipan, but do you see those parallel strips just over our nose? They're what remains of old "North Field" from where Enola Gay launched on 6 August 1945 with its nuclear load code named "Little Boy" en route to Hiroshima. Three days later Bockscar launched with her load "Fatman" for Nagasaki. The next day, 10 August 1945, Japan capitulated and WWII unofficially came to an end. Saipan and Tinian here are just two of the 14 islands that make up the Commonwealth of the Northern Mariana Islands that stretch some 300 miles. 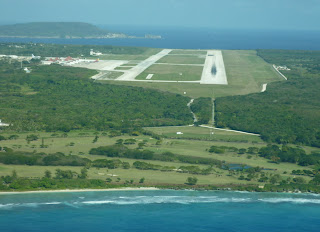 Saipan, straight ahead. But what's that over in the far corner just beyond the airline ramp? 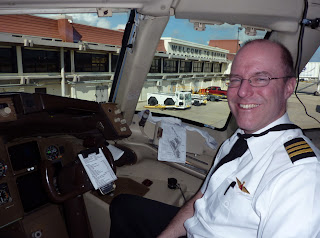 Greg and I have about 1:45 minutes on our hands so after completing our shutdown checklist, wolfing down lunch and preparing for our return trip to Narita, we abandon the cockpit in search of other aircraft. 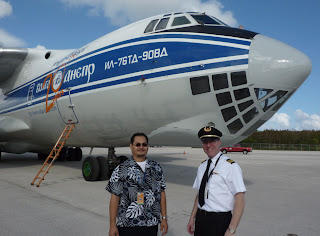 And this is what we found. Andy, our station manager piled into his truck and drove us to the other side of the field where we found this. It's a Volga-Dnepr IL76TA, just one of a varied fleet designed for heavy lifting. 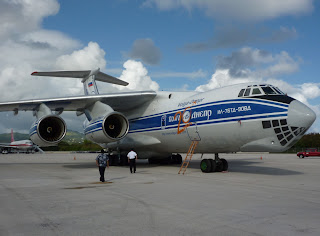 This is a Russian based company, that I've seen all over the world that specializes in moving large, bulky, heavy objects. This aircraft normally has a crew of seven with a MTOW of 346,000 pounds and a range of 3,650 miles. I think that this is the smallest aircraft in their fleet. A rather ungainly looking flying machine, but it gets the job done I suppose. 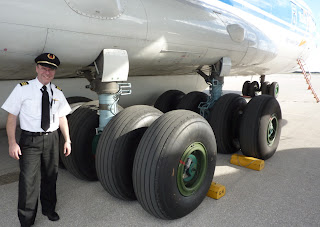 Four tires per main truck for 16 tires on the main landing gear. Look forward and you'll see the nose wheel assembly with four tires. I'd love to see all these wheels retract! 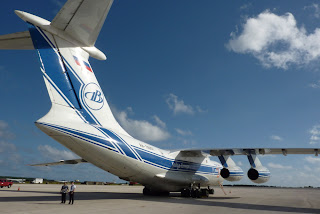 Andy and Greg beneath the tail. Look closely... you'll see them. 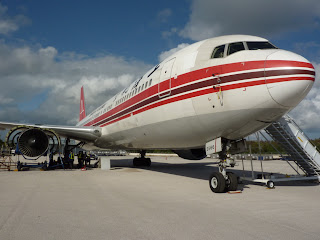 Anyway, this is why the IL 76TA is here today in Saipan. This Shanghai Airlines B-767 blew the right engine shortly after takeoff and returned to land. A few days later a new engine was shipped in and maintenance was working on it when we arrived. 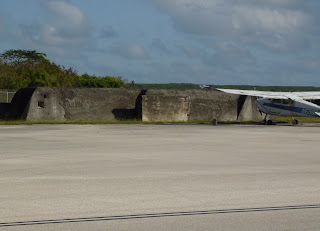 OK, we have to run and head back to our 757 to launch for Narita, but before we do, Andy gives us a quick tour including this WWII Japanese bunker. After the Marines secured the island on 7 July 1944, this airfield became known as Isley Field, home to the 73rd Bomb Wing, 21st Bomber Command of the 20th Air Force. Picture if you can 180 B-29's on this site.
Thanks for following along on this quick Saipan turn, but before I shove off, let me leave you with an email I received regarding recent events in Japan. This is a first person account from a brand new 767 captain on his first Asian trip. He and his crew did a fantastic job... my hat's off to them.
*    *    *    *
And for those who think that we just push buttons once in a while, maybe you'll think of "ghost-rider" (I love that reference) and his crew should that misguided thought ever pass through your brain again.
Thanks for following along.... until later, Rand
Posted by Rand Peck at 10:17 PM