I'm off on a ten day Asian trip flying to Busan, South Korea, Guam, Saipan and Saigon out of Narita and will be away from my keyboard for a while. Sayonara! Visit the JET LAG CLUB.
Are you familiar with the book ALIVE, by Piers Paul Read? Or the Movie ALIVE, starring Ethan Hawke, released in 1993? They're based on the true life story of Nando Parrado and his Uruguayan rugby teammates, who crashed aboard an FH-227 in the Andes Mountains in 1972. Given up for dead, they endured 72 days in the mountains before Nando decided to hike out and seek help. Sounds easy huh? But it took ten days of hiking in freezing temperatures, with little food to find civilization. Nando's mother and sister died in the crash and having resorted to cannibalism to remain alive, 16 of these young men survived to tell their tale. Click here to learn the details of this unbelievable story of courage and perseverance. 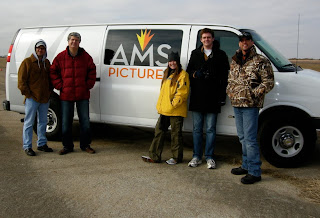 Director Brad Osborne, President Andy Streitfeld, Office Manager Katie Dunn, Daniel Streitfeld and videographer Craig Constant are just part of the contingent filming at Durant, Oklahoma.
I received a phone call from Andy Streitfeld a while ago, describing his company's interest and efforts in producing a new documentary about this very famous crash. Brad Osborne, his Director, was there too as we enjoyed a long conversation. They'ed learned about my FH-227 experience on my website and reached me on my cell phone at the Atlanta airport commuting home from 767 training. I was tired, anxious to return home and had little interest in their project, but their enthusiasm and passion for this remarkable story was contagious as they asked me to participate as a technical advisor. A few days later, they sent me the DVD of the 1993 movie and Piers book. I watched the DVD, read the book and I was hooked. How could I say no? 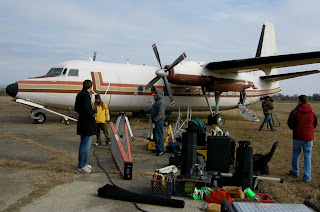 I flew into Dallas on January 6th and Katie picked me up at my hotel the next morning to visit their offices. This alone was worth the trip. They look like several movie sets that they use as backdrops and are like no other "offices" that you've ever seen. It even has a full blown replica of an old "diner" where we enjoyed coffee while discussing today's events. We were soon on our way to Durant, Oklahoma, about a 90 minute drive, where they'd found a non-flying F-27 to use for filming. 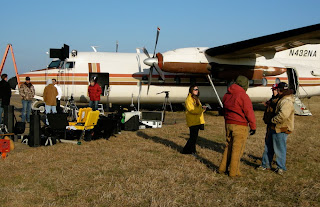 AMS crew setting up for a day of shooting. It's January, it's cold and daylight is at a premium. "Action!" 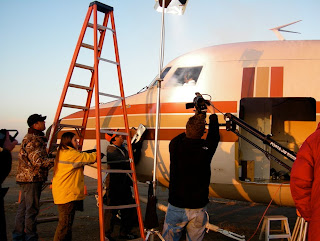 Craig, Katie, Isreal Pedraza and Taylor Witt create clouds with a smoke machine, as they film Larry Rodriguez in the captains seat, in a scene from I'm Alive. I was particularly impressed with the extent Brad and Andy would go, to achieve realism. In fact, Andy and his son Daniel were to leave in a few days to travel to the crash site in the Andes Mountains. A trek that would take several days, they'd learn more about the crash and those stranded deep in the mountains, surrounded by snow and given up for dead.
Charter flight 571 attempted to cross the Andes on a flight from Montevideo, Uraguay to Santiago, Chile, with 45 onboard. Only sixteen would survive the crash, starvation, injuries, freezing temperatures and an avalanche that buried what remained of the Fairchild's ravaged fuselage. 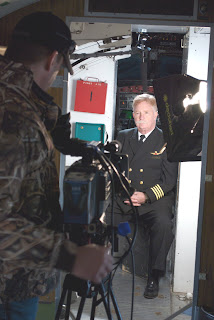 My job was to answer technical questions and give a pilots perspective of this airplane. I flew the FH-227 many years ago at Boston based Air New England, as I started out on my airline career and was not a fan of its performance capabilities. It was vastly under-powered and a bit of a "lead sled" at altitude. Flight 571 hit a peak at 12,000 feet, sheared off it's right wing and took the tail with it.
I'm seated here in the forward cargo compartment, just in front of the cockpit as Craig films and Brad asks me questions. It was rather cold, but they'd purchased an electric heater to keep me warm and not shiver. 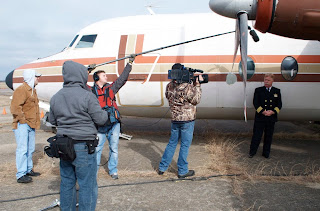 Outside the airplane, Brad asks more questions while Craig films and Taylor captures my words. Constructed in 1959, 432NA is owned by South Eastern Oklahoma State University and resides at Eaker Field in Durant, OK. 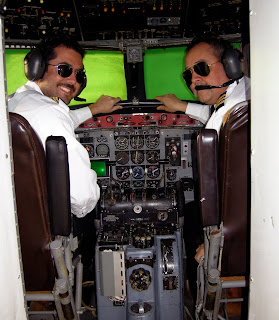 Larry Rodriguez, AMS Production Coordinator and and Tim Wylie, Senior Producer, seated in the cockpit of N432NA for filming purposes. Note that the windscreen is "greened out" for editing in scenes at a later date. 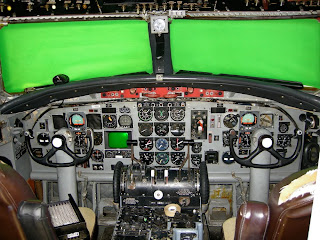 Here's a little better look at the F-27 cockpit. A week after my visit, FH-227 enthusiast/collector Gary Orlando, who writes The Whistle Pig, arrived to lend his expertise. If you have any FH-227 or F-27 memorabilia lying about that will someday be lost in the shuffle, consider contacting Gary and donating it to his collection. It will be carefully archived and preserved for others to enjoy on line. 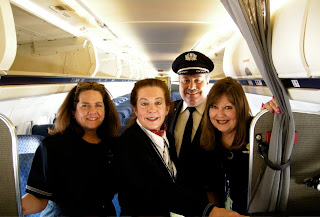 The next day, I was to board Delta flights from Dallas to Boston with a stop in Atlanta, arriving home about 1700. (You've heard the joke I sure about Delta pilots when they die? They have to pass through Atlanta to wherever it is they're destined.) But I called American reservations and asked when their first DFW-BOS nonstop would leave. Res very kindly put me right through to jumpseat control and listed me on flight 1466, leaving at 0640. I arrived in BOS at 1030 and was home hours earlier than expected and avoided Boston rush hour traffic north bound to New Hampshire. What a deal!!

My thanks to American Airlines, MD88 captain, Dwayne Williams and his crew for their generous hospitality. I'd also like to thank Andy Streitfeld and his crew at AMS Pictures for a wonderful experience and an insightful look into how documentary films are produced. Look for their film during the summer of 2010, probably on Nat Geo, the Discovery Channel or another adventure related TV channel.
Misc pictures that I took throughout the day 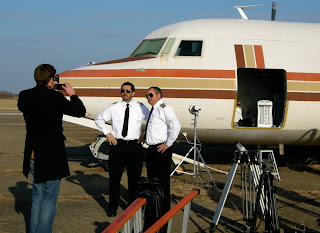 Daniel taking stills of Larry and Tim by the airplane. 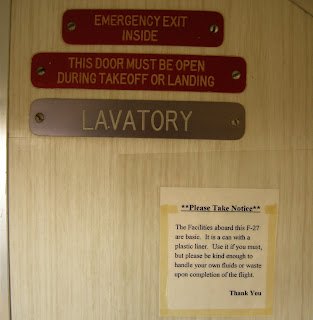 A notice taped to the "blue-room" door.
This is interesting... and people complain about today's airline industry!! 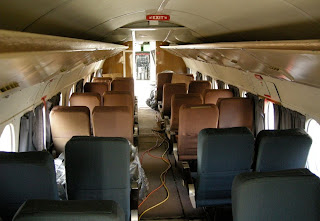 The interior of 432NA looking towards the cockpit from the galley area. 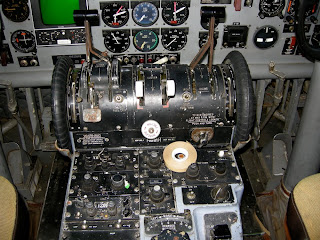 A close up of the throttle quadrant. Look at all this stuff!
Of all the airplanes that I've flown over the last 35 years, the FH-227 was one of the more difficult to learn. Some of that is attributed to my novice status at the time, but the propeller system with its prop pitch locks was a nightmare to learn. In those days, our training manual was the manufacturers maintenance manual and every detail was addressed and later tested by check airmen during an oral exam. 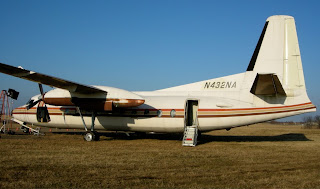 A full view of 432NA.
Click over to my website and scroll all the way to the bottom of my home page to see the AMS trailer to their new film I'm Alive. I think that you'll enjoy it.
As usual, thanks for reading along.
Rand
Posted by Rand Peck at 9:08 AM 4 comments: