Thanks to AIRWAY's editor John Wegg for the photo above. Note Mackey, on the side of the car door and a fire extinguisher in position for radial engine starts. Mackey, formed in 1946 merged with Eastern Airlines in 1967 and flew primarily from Florida to the Bahama's and the Turk's & Caicos Islands. Their fleet included DC-3's, DC-6's and Convairs. 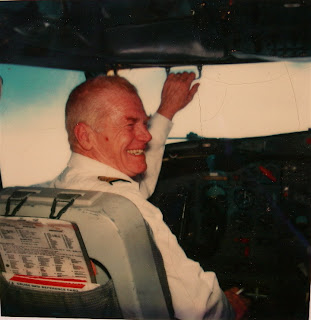 January 1980. Dad's retirement flight in a 727 as we were inbound to BOS for his last landing on runway 27. I rode in the jumpseat. This 727 was the first "stretched," or 200 series three-holer delivered to the airlines and NEA in particular in 1967.
As many of you know, my Dad flew for BOS based Northeast Airlines from 1946 through 1980, during the "golden age" of American Air Transport. I can practically recite the 1957 seniority list with names that included; Anderson, Bean, Mudge, Lord and Chaves. I wanted desperately to fill a slot on the NEA seniority list, but was too young when they merged with Delta in 1972. I interviewed with Delta in 1978 while flying with BOS based Air New England, but when they discovered that I was "Red's boy," I was done. DAL employed a nepotism policy in those days.
My father flew what may have been Northeast Airlines last flight. He departed BOS in a Northeast DC-9 on September 30 and and landed in Miami just after midnight on October 1, 1972 in a Delta DC-9. September 30 was the last day of operation for 39 year-old NEA as it officially merged into DAL the next day. NEA was the launch customer for the stretched or -200 series 727, in fact DAL had no 727's in its inventory at the time of the merger. 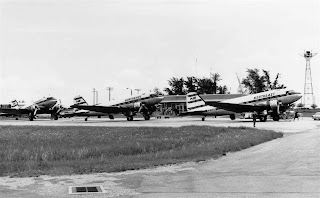 Three NEA DC-3's on the ramp in Montpelier, VT (MPV)
Montipelier, 160 miles north of BOS just south of the Green Mountain Range, was an outlying station and it was abnormal to have three 3's here at one time. This picture was given to me by retired NEA/DAL captain Dick Barnes, who holds the distinction of flying Northeast Airlines last DC-3 flight. Dick Greene was his copilot and Helen Chase was the stewardess on this historic flight from Nantucket (ACK) to LaGuardia in December 1966. There are no longer any NEA pilots flying with DAL.
Kent Greenough and Randy Luce manned this station for NEA then and later ran it for Air New England. I was fortunate to have known them and acquired much of my NEA memorabilia from them. I lived in Stowe, VT and commuted to BOS from here as well as flying Twin Otter flights in/out. Every time I came home from a trip, another piece of NEA history would be sitting inside my trusty Land Cruiser awaiting my arrival. It was like Christmas in July sponsored by these two generous fellows. 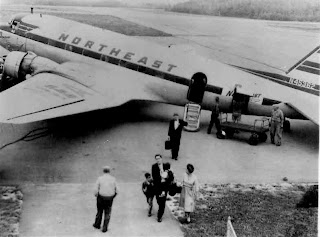 A Northeast DC-3 on the ramp in Lewiston, Maine (LEW)
Constructed in 1942 for the US Army Air Force.
You may have read my story in AIRWAYS concerning Lufthansa and their restoring a Lockheed Constellation in Maine. If you did, the hangar that we enjoyed their festivities in, is located directly in front of the nose of this DC-3... only 50 years later!
This picture was on display in the LEW passenger waiting area for many years, when our ANE station manager Suzy ???? acquired it for me in 1975. Just to clarify, I made a copy of it and returned it later! 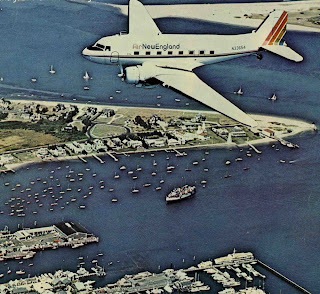 An Air New England DC-3 overhead Nantucket. (ACK)
I never flew for NEA, but was lucky enough to be hired at HYA based, later BOS based Air New England in 1974. This was a company promo picture of one of our six DC-3's over Nantucket in either 1973 or '74. Our demise followed in October 1981 and employment later at Orion and Republic Airlines was attained through ANE friends already there. Ward Dunning secured me a sideways (727 FE) seat at Orion and Wes Lundquist, Bob Finnigan, Owen Hickey, Dan Hallinan and others somehow convinced Karen Dompier to hire me at Republic a year later. Republic merged with Northwest Airlines in 1986 and Northwest with Delta Airlines only recently. It's funny how life unfolds isn't it? 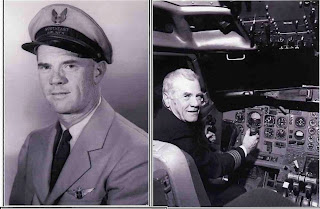 My father, sometime in the mid 1950's, dual qualified as a DC-3 and Convair 240 captain and on his retirement flight in 1980.
Aging Eagles
Not only do I love seeing my Dad's contemporaries at Captain Bill Grady's NEA reunions in June and October in Plymouth, NH, but more and more Air New England pilots are showing up too. From left to right: Wes, hired with me at ANE in 1974 and instrumental in getting me hired at Republic in 1985. Today he's an A-330 captain at Delta. Alec recently retired from USAirways and has just written a book. Rand. Christine was an FH-227 Stew who married Hook, one of ANE's most beloved pilots who went on to fly at Continental. Sadly he died of cancer a couple of years ago. Gary went to People Express and retired a few years ago as a 767 captain at Continental. Jack, who also went to Republic, retired a few years ago off the 747-400 at Northwest. Howard was a training captain and Chief Pilot at ANE. Tom, like Wes, migrated to North Central just before ANE went under and is a 757 captain at Delta today. Tom's wife Sidney (not pictured) another ANE alumnus is a DAL A-330 captain today. Eddie, another 1974 ANE classmate, went to Allegheny Airlines in 1978 and is the VP of Flight Operations at USAirways today. This picture represents just a small sampling of the 175 ANE pilots whose friendship I still enjoy today.
I made this short video from clips taken at the October NEA reunion to show some of the eclectic airplanes that these folks arrive in. There are many others, including Bob Trinque's restored Beech-18 and a plethora of little tail draggers. 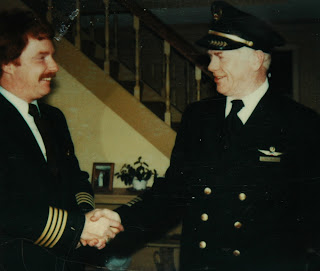 My Dad and me at his home in Amherst, NH on the morning of his last flight.
I rode jumpseat during this flight. At the time, Delta had a no jumpseat policy; it took him months to achieve approval for this. Jim Baker was the BOS Chief Pilot then, had flown as a DC-6B Flight Engineer for my Dad years earlier and helped expedite this request. My mother and sister were in first class as we all enjoyed the trip up the east coast from sunny Tampa to an inclement Boston.
The sun had set on a cold, dark January evening as he flew radar vectors over the old Boston Light established in 1716 and the historic Outer Harbor. General Washington assumed command of the Continental Army here in 1775 during the "Siege of Boston" and ran the British out with Colonel Knox's captured cannon just off our left on Dorchester Heights. USS Constitution, America's oldest commissioned warship, better known as Old Ironsides, as well as the Old North Church, Bunker Hill and Fort Independence are there too; reminding us of a time before jet air travel.
Out of 12,000 feet and slowing to 250 knots, he disconnected the autopilot to enjoy the feel of Jack Steiner's fabulous design one last time. With inboard and outboard ailerons, assisted by flight spoilers and a rudder load limiter, this is an amazingly responsive jet. He called for "engine anti-ice, flaps 2, then 5 and finally flaps 15" as we slowed and maneuvered for a left base to runway 27 at the old East Boston Airfield. Buffeted by a moderate wind from the east and shrouded in snow squalls, made visible by our landing lights, the gear came down and the flaps reached 30 degrees as we passed 1,500 feet inbound from the outer marker.
Dimly visible now through dark and snow, moisture streaming back over our heated windscreen, we sighted the runway end identifier lights. The end to his accident free, 25,000 hour, 34 year career was in sight, but I couldn't help but wonder how many times he'd enjoyed this scene since his first experience here in 1946 aboard a DC-3. Go ahead, ask any professional pilot which phase of flight he or she enjoys most. Without hesitating, they'll confirm that breaking out at minimums in a hand flown ILS approach is just plain fun! The lower and windier the better. With a little crosswind control tonight, Dad will roll on the upwind mains, bleed speed and fly the downwind mains and the nosewheel to the runway, extend the spoilers and gently pull his "dependable" JT-8's into reverse and lightly apply the brakes. 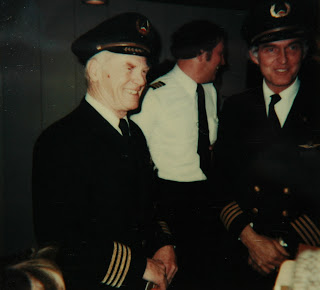 At the gate in BOS after his last flight with Captain Stafford Short. In the center is retired Captain Ron Pach who was the Flight Engineer on this flight and the FO was retired Captain Bob Hobbs.
The satisfaction of delivering 150 fellow humans home in adverse conditions, professionally, safely and smoothly, is immensely gratifying. But it doesn't end there. When I see a young mother struggling in the jetway with a stroller I think of my niece, or an older couple overwhelmed by it all my parents come to mind. It takes but a moment of my time to choose to help out and offer a hand. What would my father have done? What would he have expected from me? I really don't need to ask myself these questions... I know! Most aviators love this craft. Many pilots don't however and it surfaces in their skills and attitudes toward other crew members and passengers.

Just in case you may have been wondering, these two photos (above/below) will give you a feel of what its like to fly a visual approach to runway 27 at BOS. The shot above, much as it might have appeared in 1946 was taken from within Air New England DC-3, "Triple Six" in 1975. The shot below was taken on final to the same runway from a B-757. As usual, thanks very much for following along, I hope that you've enjoyed flying on my Dad's last flight and meeting some of my ANE pals.
Rand 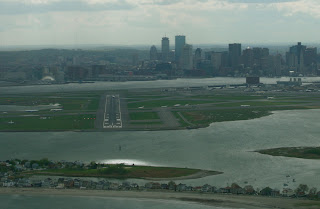 Right on the VASI
Posted by Rand Peck at 9:01 AM