I've added a new LINK to my favorites site; passrider.com. This site has bailed me out several times when I've finished a trip in a city other than my domicile and want to fly directly to BOS. In seconds I know everything I need to know to quickly get home. It's also wonderful for any type of pass riding or planning after you've been bumped from several flights.  Give it a try, I think it's a fantastic tool.
Meet Captains Frank Moss and John Brier. 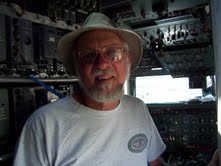 Captain Frank Moss in the companionway of Historical Flight Foundations DC-7B, N836D, serial number 45345, delivered new to Eastern Airlines in 1958.
I'm still away from home, have about four more weeks to go, but I just received these photos from my friend John Brier and wanted to share them. Let me introduce you to a couple of good friends from my past. This is Frank Moss, he was hired with me in 1974 to fly at Hyannis based, later Boston based Air New England. I've written much about this historically significant commuter airline that at one time was the nations largest commuter airline. We flew an eclectic variety of airplanes that included Twin Otters, DC-3's, FH-227's and Convair 580's. It was a ball and as we age, friends like Frank and John become even more valuable to me.
In October 1981 we were given notice that our little airline would be shuttered shortly. We all scrambled to acquire, fill out and distribute resumes and applications to Eastern, Delta, Braniff, Piedmont and other major carriers. That is all of us except Frank, who marches to the beat of a different drummer; and I say that with great admiration. While most of us sought seats in DC-9's, 737's and 727's he had a different vision. Frank took off for Alaska in search of DC-3's, DC-4's and remote gravel runways. He found them! Other radial adventures saw him spanning oceans and jungles through skies over South America. He is a Renaissance Man. 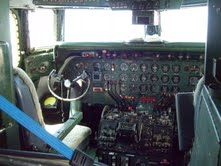 Here's a little closer look at the cockpit of Historical Flight Foundation's historic Douglas Airliner.
Now this ladies and gentleman is an airliner. Round dials, muscular radial engines, prop levers, mixture controls and cowl flaps. Standing here I can inhale the intoxicating aroma; a mixture of leather, coffee, Lucky Strikes, oil and combusted high octane aviation gasoline that defines this magnificent flying machine. Her engines rumble easily, while the individual firing of her 18 cylinders, shrouded within these Wright R3350's is symphonic. 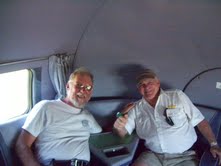 Captains Frank Moss and John Brier in the back "lounge of the "Seven." John flew with us at Air New England too, but left to fly at a variety of airlines before landing on his feet at People Express where he flew the 737 and 747, eventually retiring from Continental Airlines. Today he enjoys flying his Cessna Cardinal between his homes in Florida and Maine. 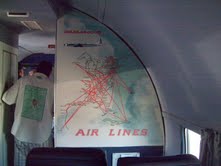 Eastern's been gone for a long while now (1926-1991) and many of you may be curious as to exactly where Captain Eddie's Great Silver Fleet flew.  Look at this cabin divider and enjoy a wonderful display of their route map. If you're moved by the thunder from radial engines, the aroma of combusted aviation gasoline and the history of Douglas Aircraft and historic airlines, you may want to click over and visit those at The Historical Flight Foundation.  If you'd like to see photography dedicated to this DC-7B, visit Chris Sloans website for a very enjoyable experience.
Thanks very much to John for sending me these photos. I plan to make a trip to Florida soon to visit Frank and see this beautifully restored DC-7B.


I've been listening lately to news reports concerning the SWA 737 that developed a hole in her fuselage last week. My first reaction is how ill informed our news sources are with regard to aviation matters. If they report dubiously here, why would I expect accuracy in other fields? Before I get into that though, let me express my congratulations to a professional airline crew who handled this emergency in stride.
One reporter expressed that she never wears her seatbelt while flying at cruise altitude and didn't think that it was necessary. She's changed her mind now though. Interestingly, I bet she wears her seatbelt in her car at all times. What she and most people fail to consider, is that at altitude they're flying through the earths thin, upper atmosphere at 80% of the speed of sound in a metal tube. We're generally flying in the troposphere over oceans, lakes, mountains, cities, forests, deserts and other land forms that contribute to uneven heating of the atmosphere above, creating turbulence. Now throw in a jet stream that often experiences speeds in excess of 150 mph and we can see that we're operating in an unpredictable environment. And we haven't even mentioned clear air turbulence yet!
So, when your flight crew advises to "wear your seatbelt anytime that you're in your seat, like we do in the cockpit," there's good reason to do so. Also, please pay attention to the flight attendants when they attempt to inform you concerning emergency procedures. From this incident we've learned that many passengers were unable to activate oxygen flow from their oxygen masks dispensed from the PSU above. Why? Because they were probably reading the newspaper when instructed in its use.
Once again, thanks for following along.
Rand
Posted by Rand Peck at 9:19 PM 9 comments: