Let me address a point made earlier by Mark Lawrence.
Mark asked about the farmers home located smack dab in the middle of Narita Airport.
Here it is. 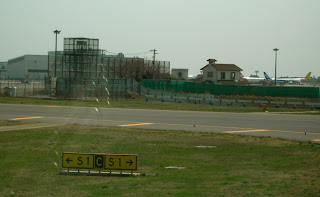 Mark, here's the photo to which you referred. This is the farmers home who absolutely, unequivocally, with out hesitation, refused to move as eminent domain forced others out. The story goes that the emperor gave either him or his family this land and he wasn't leaving and that's that! So they constructed NRT around him and cordoned him off. His home is located between taxiway Charlie and the JAL maintenance hangar. The main terminals are located to my back in this picture. To the left you can see the guard tower, manned 24 hours per day to keep an eye on this fellow. But here's the interesting or clever aspect of this situation. Do you see the little tower that rises from the roof of the building? It's a clock tower that faces directly at the guard tower. The guard is forced to observe a clock all day long and time drags when you constantly check the time. I'd like to meet this clever farmer, although I've never seen any activity around this property. 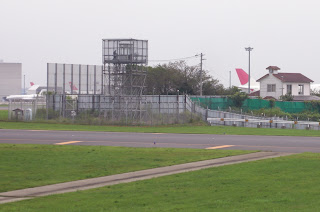 Here's a different angle that better depicts the guard and the clock tower as a JAL 747 taxi's past in the background. 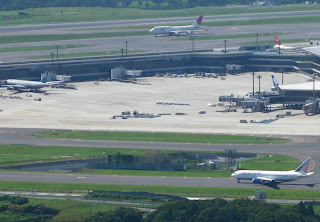 And finally, here's an aerial view of the compound that really shows the position of the farmers home with regard to aircraft activity. He's situated between two major taxiways with the main terminals and the JAL maintenance hangars nearby. Mark... you and your son would never have to leave home again to take an aircraft shot if you lived here!
Before I get into my new post, let me send my congratulations to Justin Schlechter, who just had his first story, HOMECOMING, published in the December 2010 issue of AIRWAYS MAGAZINE. Justin is a 747-400 copilot; to learn more about him and his world-wide adventures, visit his blog at POSITIVE RATE. Congratulations Justin, you'll enjoy a wonderful relationship with the Weggs and everyone at AIRWAYS. 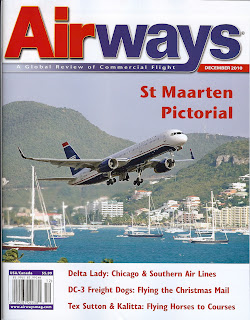 OK, after a fantastic Paris layover with Dave and Thad it's back to Asia again with layovers in Beijing, Narita and Guam before returning to SEA and commuting home. 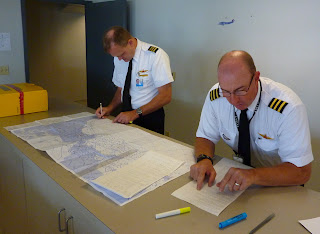 Bill, to the right, and I had flown into SFO the afternoon before in a 757 and enjoyed a downtown layover where I indulged in another fine Italian dinner at my favorite San Francisco Italian restaurant on Polk Street. As good as it is though, no one beats my wife's Italian cooking. Bill and I met John here at the International terminal at SFO the next day to plot our course to Narita. We flew the Pacific on a random track south of Anchorage as Bill reads the coordinates and John plots them on our Pacific Orientation Chart. I'd flown the Quiet Bridge arrival the day before, so this would be Bill's leg uploading the route, leaving me to check and confirm the waypoints. 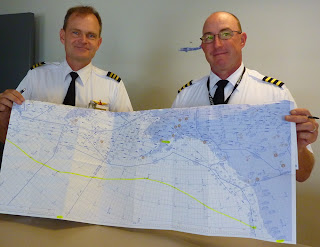 The Final Product
And this is how our orientation chart looks after completion. It's a little hard to see, but we leave SFO and fly north up the coast towards Seattle before turning out to sea over the North Pacific. We'll pass well south of Anchorage and turn more westerly near the end of the Aleutian Island Chain. You can see the fixed tracks above ours at this point.  We'll fly south Sea of Okhotsk and skirt the Russian coast before entering Japanese airspace.
This route, chosen by our dispatcher, will keep us away from the strongest winds aloft and avoid several areas of scattered thunderstorms and turbulence. Our total flight time is predicted to be 10:52, ten hours fifty-two minutes to cover 4,573 nautical miles.  Today's fuel load equals 144,700 pounds or roughly 21,600 gallons of gas... Jet-A to be specific. 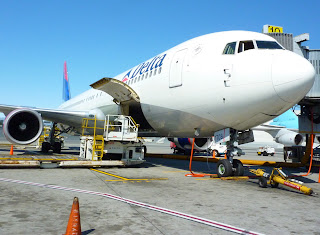 As I'd mentioned earlier, this is Bill's leg so I'll go out and do the walk around inspection. This is a Boeing 767-332ER that since the merger hasn't seen the paint shop yet. I've always liked Delta's old red/blue widget tail; it was distinctive and easily recognizable in the marketplace and I could never figure out why they went to this wavy colored tail design. I suspect that it was change for the sake of change and didn't serve the corporation well.
On the other hand, Northwest created it's image (not necessarily always good) in 1948 with the "Red Tail" and maintained it until the merger with DAL on 2009. I've heard stories from  business travelers arriving at Asian airports after being away from home for months, seeing the NWA red tail and feeling like they were home. It may sound corny but it's true and this is an excellent example of a marketing department creating a recognizable image.
Frankly, I'd like to see DAL return to its roots and resurrect the original widget and it's previous red/blue pilot wings; distinctive, marketable and recognizable images. At NWA we enjoyed the industry's most unusual pilots wings in the form of our "US Airmail" wings designed in 1929. I've written about them many times so won't bother to go into it again except to say that they set us apart. 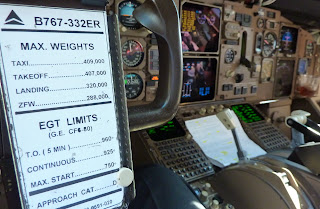 Here's a little more information about our airplane that we'll fly today. 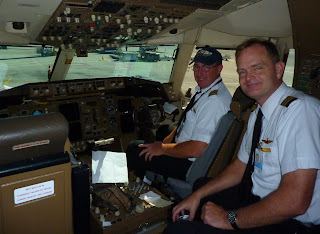 I've returned to the cockpit where Bill and John have finished most of their preflight assignments. In Bill's case, he activated the flight computers, fixed the aircrafts current position at the gate via the GPS and uploaded our flight plan, winds aloft and descent winds. John checked the aircraft logbook, checked the potable water level, waste tanks and is available to do anything else that crops up. After I get into my seat I'll preflight several panels, discuss the logbook with John and review the route uploaded into the computer and call for the Preflight checklist as passengers board and flight attendants make them comfortable.
I've also met with our Purser to discuss our route, weather, ETA and aircraft cabin systems. I always finish my brief with, "If it's important to you, it's important to me," which is my way of letting the purser know that I value their input. Let's face it, I'm very much removed from what goes on back here and will make decisions based on the flight attendants judgement. 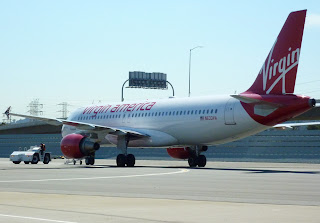 We've pushed back from gate 10 at the International Terminal at SFO, have completed the before start checklist and have been cleared to start the engines. That's the first officers job now as I communicate with the tug driver, set the brakes and monitor the start.
Bill's completed both starts, we've been waved off, completed a before taxi checklist and I asked Bill to obtain a taxi clearance. This also signals him to extend the flaps to the five degree position. We've just been cleared to taxi to spot seven behind this Virgin America A-320. Believe it or not, but this is my first time leaving from the International Terminal at SFO as my previous Honolulu experience departed from the domestic terminal. 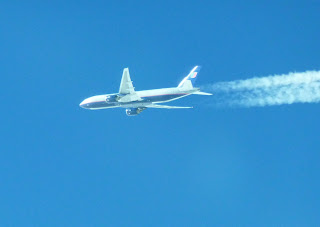 We're north of SEA and Vancouver headed towards Anchorage when United passed us by. 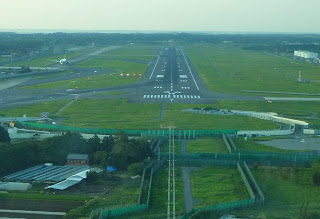 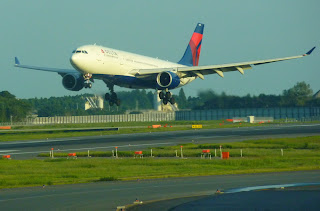 Now we're at that hold point called "the north hold point" if I remember correctly as a DAL A-330 lands on 34R. As we taxied to the gate we saw five.... yes five company aircraft land so we need to scoot right along so we don't get stuck in the back of the customs line. 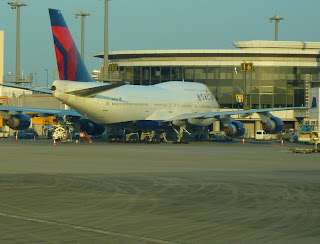 We're looking for gate 14 just around the corner past this 747. The great part about arriving at NRT is that the hotel will have several busses waiting in the pickup area for us. No waiting! This is only a nine day trip so Bill and I will spend six days in Asia flying to Guam and Beijing before flying flight 174 to SEA. That flight will cover 4,822 nautical miles in ten hours 52 minutes.
Once again, thanks for reading.
Rand
Posted by Rand Peck at 9:46 AM 15 comments:

I'm working on posting pictures from my latest Asian trip. In the meanwhile here are a couple of galleries from Chris Sloan that I'm sure you'll enjoy.
This is a gallery of shots that Chris took from a recent visit to SEA and the Boeing Museum of Flight.
The 787 (Dreamliner) recently visited Ft. Lauderdale and Chris ventured over with his camera to create this  Gallery
Want to learn more about Chris Sloan? Visit his fantastic site at AIRCHIVE.COM 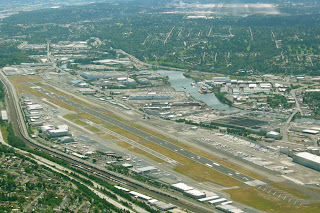 Just in case you're unfamiliar with Boeing Field and the Museum of Flight, here's an aerial shot taken while landing at SEA, just at the top of the photo. You pass directly over Boeing Field when landing to the south at SEA. The museum (glass enclosure) is located on the right side, near the departure end of runway 13R
Posted by Rand Peck at 1:01 PM 2 comments: